(Click to enlarge images)
On at least one forum today, there is renewed discussion about the pyjamas Madeleine's parents said she was wearing on the evening she disappeared from the family's holiday apartment in Praia da Luz. So, I thought I would briefly revisit the photos of those pyjamas, the sketch of the abductor, which Jane Tanner verified as a likeness and Jane Tanner's statements (or maybe just a couple of them!) about what she saw.

First of all, could the pyjamas pictured on the right, look like those in the image on the left when the child wearing them was being carried, not just in the way shown, but any way? Those pyjamas being held up by Kate and Gerry would surely not reach a child's ankles. They are baggy and look like they'd reach just over the knees, or at their longest, be mid-calf length when a child was standing up, but lying down or being carried, they'd probably slip up over the knees.

Now, let's look at some statements from Jane Tanner:

"The vital witness, a close friend of Kate and Gerry McCann, was on her way to join Madeleine’s parents for dinner at the tapas bar when she saw a man with a blonde girl wrapped in a blanket. She was wearing “distinguishable” pink pyjamas, the woman has told police."

"The woman saw the man close to the open window of the bedroom where Madeleine, then 3, had been sleeping with her two-year-old twin brother and sister, Sean and Amelie."

"The woman saw the man at 9.30pm as she arrived late for dinner with Mr and Mrs McCann and other friends at the Ocean Club resort in Praia da Luz, where they were staying. She did not realise the significance until Madeleine’s mother went to check on her children 30 minutes later, discovered her daughter was missing and came back in an hysterical state. Madeleine had been wearing pink and white pyjamas."

"The man is white, 35 to 40 years old, of medium build and 5ft 10in. He has short hair and was wearing a dark jacket, light beige trousers and dark shoes."

"A TINY figure wearing pyjamas lies still and quiet in a man’s arms – in an image thought to show the abduction of Madeleine McCann.

Parents Gerry and Kate hope the chilling picture – drawn from an eyewitness account and released last night – will bring them closer to the truth about their daughter.

Swarthy, aged around 35 with black hair curling round his collar, the slim, 5ft 6in suspect was spotted hurrying away from the McCanns’ holiday apartment by Kate and Gerry’s friend Jane Tanner."

"But she did get a good look at his hair and clothing – a maroon shirt, camel coloured trousers and black or brown shoes."

Amazingly, on the same day as the Sun's article, where the abductor's height was given as 5'6", the Times presents this description:

"The man is approximately 35 to 40 years old, of medium build and about 5ft 10in. He has dark collar-length hair and is wearing a dark jacket, light beige trousers and dark shoes. He was allegedly seen by Jane Tanner, one of the McCann family friends, at 9.15pm on May 3. About 45 minutes later Madeleine was reported missing from her bed in Praia da Luz."

It's now 9.15pm when Jane Tanner sees the man carrying a child.

"Jane Tanner, 38, said that as she passed a man carrying a child in their holiday resort: "Never in a million years did I think it could have been Madeleine.

"I just saw a person walk along the top of the road with what could have been a child in his arms."

But marketing executive Jane is now certain that she saw poor Madeleine being carried off in Praia da Luz, Portugal."

"I'm talking now because I'm being called a liar and a fantasist. I know what I saw.

"I think it's important that people know what I saw because I believe Madeleine was abducted."

"At around 9.15 Jane was walking back to her apartment when she saw a man striding across the road in front of her. In his arms there appeared to be a child, barefooted, wearing pink pyjamas."

From Jane Tanner's interview with the Leicestershire police in april 2008:

"According to Jane Tanner, the man had long hair, quite dark and shiny. He was wearing dark clothes, "not big, but quite baggy."

"Dark colours, but then again it was, I think that it was quite dark, so dark, kind of a dark sort of jacket, but on the other hand, lighter trousers in a horrible colour, again this is, kind of a dark yellowish-brown, horrible, but not, not a good colour for trousers, but on the other hand, I wonder if it was the light that made them appear, made them appear more of a sort of mustard. It wasn't a mustard because it was too light, but it was just like one, as I said they weren't attractive. They weren't the kind of clothes I would expect of someone on holiday at Mark Warner. They were, I can't think of the material. I tried to describe it before, but as some sort of cottony material, but baggy," Tanner states."

During this statement in April 2008, Jane Tanner also seems not too sure about where Gerry McCann and Jez Wilkins were standing, but she is sure that she passed by quite close to them:

"I went back up the road and I can't remember exactly, I know this, I know, I think that Gerry thinks he was in a different place from where I think he was standing, but I was quite sure, as I walked back up the road, they were standing, one of them was on the road and the other was just on the edge of the pavement, but I thought that it was at the side of the road where I was walking, but I know that Gerry thinks they were on the other side. But I think they were closer, because as I passed, I nearly went to greet them in some way and I thought at that moment Oh "they're chatting chatting chatting" and I thought, you know, I didn't, I didn't know if they had seen me or not, but I actually went to greet them and I think if they had been so far away I don't know if I would somehow have almost gone to say hello to them," states Jane Tanner admitting that she and Gerry don't agree about where they found themselves."

However, neither Gerry nor Jez actually saw Jane Tanner, however closely she says she passed them.

Ms Tanner does not seem to be a very reliable witness, but the difference between the actual pyjamas shown by Kate and Gerry McCann and those drawn by the forensic artist to Jane Tanner's description, and verified by her as a good likeness, seems to be one of the most significant details of her witness statements. Surely this is a very basic and therefore key detail. Those pyjamas would probably not have been seen by someone with Jane Tanner's view of the person crossing the top of the road, because they would have ridden up over the knees. A very simple detail, based on the design of those pyjamas, but very significant in my opinion.

Posted by AnnaEsse at 20:48 No comments:

The McCanns have released a new video of Maddie

This Saturday, Kate and Gerry MCann started off the release of a new series of video images of their daughter Madeleine, recorded in the couple's house, in December 2006, five months before her disappearance in the south of Portugal.

The video shows Madeleine sitting on the steps of the stairs of the Rothley house, flanked by the twins Sean and Amélie, whom she is encouraging to copy her actions.
The couple do not appear in the video, but it includes an appeal from them calling for Madeleine to be returned to them: "Christmas is a time for children. Please help bring our daughter back." The video ends with the message "This will be our second Christmas without our daughter. Please help us make sure we don't have a third."

The release of this new video, which the McCanns had promised for Christmas, started off tonight in Australia. Clarence Mitchell, former director of the Media Monitoring Unit and spokesperson for the family, stated that the couple "do not wish to say anything further. They feel that the video will speak for itself."

The video can be seen on the SOS Madeleine McCann web site, as well as on various news channels on TV and on their web sites. It seems rather odd that the McCanns are only now releasing this video, which is the first time the public will have heard Madeleine speaking. It also gives a much better impression of the real child who disappeared from her family's holiday apartment than any photos the McCanns chose to release as posters of their child.

So, what does the video say to Madeleine, whom her parents are telling us is still out there? Does it say, this Christmas, we are thinking of you and hope you are safe and well? No, it says, Kate and Gerry McCann are having a hard time, please help us.

This is the poster the McCanns are asking people to download and take with them if they are going abroad this Christmas. 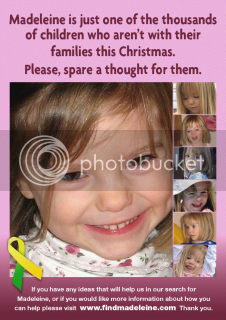 The central image looks like it was taken quite some time before the Praia da Luz holiday and it doesn't appear to show a child with blonde hair. Rather, it shows a child with mid-brown hair. I really don't see the point of producing another poster with very old images of Madeleine, who would now be aged five years and seven months and look quite different from any of those photos, simply from the natural process of growth and development, never mind the efforts of any abductor to alter her appearance.

I guess I am being very cynical here, but that poster would surely not help to find a child who could be around two years older than shown in the central image. What is the real intention here, I ask myself. And the answer I come up with is related directly to the rather prominent Paypal button on the McCanns' Christmas page of their web site.

Posted by AnnaEsse at 11:59 No comments: