Madeleine McCann may be alive and living in a lawless village in the Algarve..... 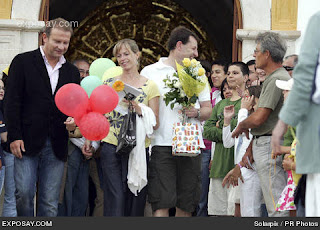 (The McCanns on the sad occasion of Maddie's birthday, soon after she disappeared in 2007.)

................and on the one thousandth day after her disappearance, her parents are busy planning for a star-studded bash to, ummm...errrr...raise more money for the search.

Now, I'm not going to go back through all that, "what search," stuff. We all know that Kate McCann did not physically search for her daughter, while local residents of Praia da Luz took a week off work to search the area.

At least a couple of million quid has gone through the Find Madeleine Fund, but what do the McCanns have to show for it?

They hired Metodo 3, the Spanish detective agency, who claimed to know where Madeleine was, who was holding her and that she'd be home by Christmas, 2008.

Then there was Oakley International, the big boss man of which, Halligen, is to appear in court on the same day as the McCanns, sadly, we are told by Clarence Mitchell, put themselves through an event at the Kensington Roof Garden restaurant, to which a number of wealthy celebs have been invited. Oh how those poor parents are suffering!

And now, we have the intrepid duo of ex-police officers, Edgar and Cowley, the twosome, who from their office in Knutsford, Cheshire, released the breaking news that two years previously a man on holiday in Barcelona had spoken to a very suspicious Victoria Beckham looky-likey, who asked if he had come to deliver her daughter. (Psssst Mr Edgar! Daughter=quarter! Quarter of an ounce!)

Now, I must admit to the above having given me something in the way of false hope. You see, working with Dave Edgar's logic, the fact that every week somebody won the lottery, confirmed my suspicions that I was going to be next. Only I haven't been. Strange logic though. The fact that out of the thousands and thousands of children who go missing around the world, a few turn up, confirms Mr Edgar's suspicions that Maddie is alive and living in a "hellish lair."? No, I don't think I can suspend rational deductive thought quite that much.

"And despite fresh leads taking his probe to Australia and Barcelona, the east Belfast man insists the golden-haired youngster is being held just 10 miles from where she was snatched in Praia da Luz two years ago."

"But he warned that the sprawling wilderness where he believes Maddie is languishing is almost impossible to search completely."

Dave, a word of advice, you have to actually leave your office in Knutsford to prove the above. I'd say those places were totally impossible to search from your office in Cheshire!

"We spent the day at the Cheshire office he uses to conduct the world’s biggest missing person case."

“Maddie is most likely being held captive, possibly in an underground cellar, just like Natascha or Elisabeth, and could emerge at any time,” he told us."

"Days later, news broke that tormented Jaycee had been freed from the foul compound where she was abused for 18 years by monster Phillip Garrido. Dave simply said: “This just supports my theory that Maddie is alive and imprisoned.”

How Dave? How does one young person turning up after 18 years prove your theory? You were an RUC cop? Desk job was it?

And who is keeping Madeleine captive? It's the Lone Prowler!

"He feels this is the lone prowler who has Maddie stashed in a cellar or dungeon in the lawless villages around Praia da Luz."

"Former detective inspector Dave Edgar, who is leading the hunt, made a secret visit to Praia da Luz at the beginning of last week."

Well, that was in September 2008 and what has Dave Edgar been doing about his conviction that Maddie is being held by the Lone Prowler, who in all likelihood is a paedophile, in a "lawless village." ? Well, not very much, it seems, because it took him until the beginning of last week to make....shhhhh.....a secret trip to Praia da Luz!

According to Sunday's Daily Star:

MISSING Madeleine McCann could be still alive and just a few miles from the Portuguese resort where she vanished in 2007, investigators believe.

"On his return, he said it was a “very distinct possibility” that Maddie could be living in a poor country district inland from the holiday area."

Did you actually investigate those areas, Dave? Tell me, what exactly is it that makes you think that Maddie could be living in one of those areas?

"A source told the Daily Star Sunday: “The areas that Dave’s team have focused on are very rural. There are no tourists around there at all. He believes Madeleine could be held in such an area.”

Dave's team? What team? Dave and his sidekick Cowley? Or have they enlisted a few more people? Ah, right! So, there are no tourists around there, so that confirms the suspicions? Well, there are no tourists around where I live either. So, maybe on his way back to leafy Knutsford, Dave should have come here and searched my jungle of a garden. I've got some pretty lawless squirrels out there! I've got no dogs, though, so Kate and Gerry could come and help! No need to worry about my cats. Like Kate and Gerry, my cats always try very hard to cover up their own shoite!

"Mr Edgar is convinced she was kidnapped and his team are still receiving a “substantial number” of calls and e-mails containing new information."

Why is Mr Edgar convinced that Maddie was kidnapped? It has been fairly well established that there was no evidence to suggest that an abductor had been in the McCanns' holiday apartment, but Mr Edgar is convinced? Why? Because he wouldn't have such a cushy number, sitting in his office in Knutsford if he weren't?

A "substantial number," of calls? Hang about! Didn't Gerry McCann say, outside the court in Lisbon, that there were no new leads. Now, Knutsford may be rather further from Rothley than eating in Gerry's back garden, but there's always that new-fangled device the telephone or even email. So, give the dog a phone, Dave. Woops! Did I mention "dog."? Silly me!

What else does the dastardly and dogged (Woops! Don't mention dogs!) Dave have to say?

"And we can reveal that some British holidaymakers who were also staying at the Mark Warner Ocean Club have not co-operated with the investigation." 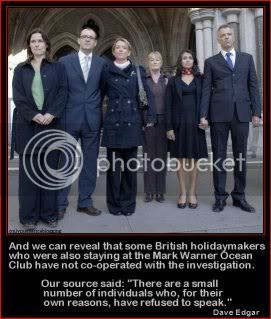 Image courtesy of Himself of The McCann Gallery

"Clarence Mitchell, spokesman for Kate and Gerry, said the probe would continue until Madeleine is found. The family hope that a star-studded fund-raising dinner on Wednesday will help boost diminishing funds."

So, while Maddie is thought to be prisoner in a "hellish lair," a few miles from Praia da Luz, her parents are putting on what to many of us would look like a celebration. No quiet night at home to sadly contemplate 1,000 days without their elder daughter, no silent candle-lit vigil, no, the McCanns are throwing a party!

"And 1,000 lanterns will be released into the sky from 20 venues across Britain and Portugal."

Not sure how that will help find Maddie, but it might just pose a danger to air traffic.

"Mr Mitchell said: “It’s a painful date for Kate and Gerry. But they remain as determined as ever.”

So, they will spend this "painful date," getting themselves dolled up to wine and dine with a bunch of celebs? I'm sure they'll manage to put their brave faces on!

And the McCanns "remain as determined as ever."? To do what? Throw money at dodgy detectives who have no previous experience of finding missing children? Persuade the world and his dog (Oh dear, there's that dog again!) that, in spite of evidence to the contrary, Maddie was abducted from the unlocked apartment where she was left, which was checked so regularly that only a tiny window of opportunity existed for abduction? And speaking of windows, only Kate McCann's fingerprints were found on the important window that a leading police officer said would be impossible to climb through, carrying a child? (Yes, I know! Kate McCann has now changed her mind about that window! The kidnapper may have opened it to throw them off the scent! I don't mean the dogs, off the scent, I mean, you know, the McCanns, off the scent!)

Good timing, though, resurrecting this story about Maddie's being held in a "hellish lair," a few miles from Praia da Luz, what with the second part of the court case coming up in Lisbon very soon, and the McCanns holding their £150 a ticket bash for the celebs at the Roof Garden restaurant. The menu looks good at that place and should be! At those prices, it's what my dad used to say, "They're no feart the coos git it, then!" Still, at those prices, I'd be taking the leftovers home. No fear! I'd want a doggie bag! Woof! Woof! 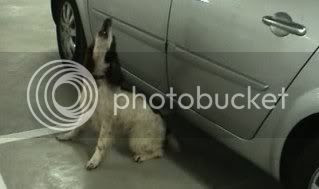