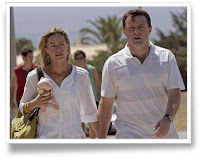 Thus far, when translating articles from SOS Madeleine McCann and from Enfants Kidnappés, I have produced the original French alongside my English version. This is resulting in very long posts. I now intend to simply produce my English versions of the originals and provide links for those who would like to compare with the original or who prefer to read in the French language.

There are two sections to the information published by Enfants Kidnappés on April 4th. The first is about the McCanns' wish to return to Portugal, which has been covered in previous posts. On Friday, Enfants Kidnappés commented that a return to Portugal by the McCanns would send a strong signal to the whole world that Madeleine could still be alive and that the search for her should continue. The McCanns will wait to assess the attitude of the PJ towards their friends during the interrogations planned for next week, and then decided whether or not to return to Portugal. Clarence Mitchell is quoted as saying that, ""Ce qui arrivera la semaine prochaine sera déterminant pour mesurer l'attitude de la police à l'égard de Kate et Gerry" "What happens next week will be a deciding factor for assessing the attitude of the police towards Kate and Gerry."

(See photo above right; I often wonder why Gerry always looks like he's doing the military two-step! Shoulders back! Swing those arms! By the right, quick march!)

The second section of the article relates to the proposed visit of the McCanns to the European Parliament next week.

The McCanns are going to be invited to a conference on abducted children, in the European Parliament on April 8th, in the context of a plan for abduction alerts in the style of the Amber system. This is a media coup, nothing more.
Many parliamentarians have protested against the appearance in the Parliament, rightly or wrongly, it matters little, of suspects in a police enquiry. In the end, the planned meeting will be limited to a meeting with British representatives to the Parliament. Basically an Anglo-British meeting.

The British people Glenys Kinnock, Edward McMillan-Scott, Struan Stevenson and Diana Wallis, are involved in proposing this meeting. The parents' going will have no influence on the declaration about European collaboration in the matter of searching for missing children, a declaration which will be adjourned while the parents are there.

That says it all! Note that if we all want alert projects for, "abduction alert," at European level, on condition of being able to regionalise alerts, we think it is necessary to ask the right people. Apart from the authorities and associations actually involved professionally in cases of abduction, we think it would be wise to ask the parents of abducted children. What does Yeremi Vargas' mother think?

What does Piera Magio, mother of Denise Pipitone suggest? What would be the advice of Juan José Cortès, father of Mari Luz? The Canadian experience of Martin Provencher, father of Cédrika? Wouldn't that be valuable learning? We don't want to launch into polemics here, but it must be recognised that the approach of parents who want to....do it for themselves and not in solidarity with others......is a little....let's say...misplaced.

And this morning, Saturday, perusing the Daily Mirror's news pages, I find, "Kate and Gerry McCann in Europe kid safety campaign." Way to go, Clarrie! Good media coverage here! I'm having a wee look at what the Mirror has to say!

"Kate and Gerry McCann fly to Brussels to launch a child safety scheme next week while Portuguese police quiz their Tapas Seven friends in Britain."

Goodness! That's interesting timing, but coincidence, of course! The European Parliament probably doesn't time it's meetings to suit the McCanns, though the McCanns' meeting will be with a few British representatives and they will not be taking part in the debate, which, anyway, is going to be adjourned, according to Enfants Kidnappés.

"The couple will be present on Thursday when a draft declaration goes before the European Parliament, calling for a European-wide missing child alert system.

Kate, 40, and Gerry, 39, believe that if it had been in place it could have saved daughter Madeleine, four, who vanished from Praia da Luz in the Algarve on May 3."

Saved their daughter? Saved her from what? An abduction? I may have missed something, but I haven't actually seen any real evidence that an abduction took place.

"The couple, official suspects in the Madeleine case, will also appear in a global televised press conference."

"Their spokesman Clarence Mitchell said yesterday: "Next to finding Madeleine, the introduction of a system which might save another child is the matter closest to their hearts.

"They never want another family to go through what they have gone through."

Clarence H. Mitchell on a raft! (I had a good Scottish Christian upbringing! No blaspheming!) They don't want other parents to go through what they went through! Kate and Gerry, I would have thought that from what you have been through, the learning experience is....don't leave your kids on their own! Or is the message here...make sure you keep the number for the alert system handy, then you can leave the kids and toddle off for drinkies with impunity? Please note! It is eseential that you leave the premises unlocked in case of fire!

On one of the BBC's Today message boards, there was a poster with an ID, which I find very appropriate in the context of the above news.