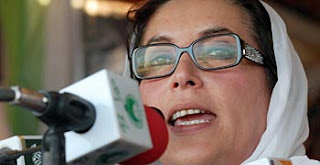 Well, I guess this was just about inevitable. Ms Bhutto knew she was taking serious risks every time she appeared in public, and today an extremist was successful. Ms Bhutto was shot in the chest and neck as she was getting into her car following a rally in Rawalpindi. The killer then blew himself up, killing at least 15 of Bhuttos supporters and injuring many others.

WTF kind of civilisation is this? You don't like their politics, so shoot them? Disagreeing with someone's political stance is a worthy reason to blow yourself up and take as many others as possible with you?

Benazir Bhutto returned from exile in October, and was hoping to stand for Prime Minister in democratic elections due to be held in January. She survived a previous attempt on her life when a suicide bomber killed 139 people at her homecoming rally in Karachi and vowed not to be dictated to by extremists.

"The stength of character for which Ms Bhutto was renowned was first seen after her father was imprisoned and charged with murder in 1977 following a military coup.

He was executed two years later.

Ms Bhutto spent five years in prison herself, most of it in solitary confinement.

She later set up a Pakistan People's Party office in London and began a campaign against the then President, General Zia.

She returned to Pakistan in 1986 and became PM for the first time two years later after General Zia was killed in an explosion on board his aircraft.

A decade later, she faced corruption charges and was convicted in 1999 after failing to appear in court. Pakistan's Supreme Court has since overturned that judgement."

"She knew the risks, she gambled, she lost.

And Pakistan has lost. Lost a leader who, despite all her faults, was a democrat who wanted to move her country forward, bring its extremists to the centre, and take on the irreconcilables.

That is why they murdered her. They could not reconcile with the possibility of a woman coming to power again. A strong, modern, working woman involved in politics is everything the Islamists fear.

It challenges their world view.

Bhutto knew how much she embodied their fears and knew they wanted to kill her.

I'd asked her about the dangers shortly before she returned to Pakistan from exile. She was quite open, acknowledging that there would almost certainly be attempts on her life, but she said she trusted in her security and in Allah.

I asked her again in Karachi just a few hours after the first attempt which killed over 130 people.

She did not say it was her destiny to go forward and lead Pakistan, but she alluded to it and said she would not be cowed from realising her dream.

But it was a gamble. Could she stay alive long enough to win the office of Prime Minister and the enhanced security the post brings.

Two weeks before the election we have the answer.

So she has lost her life, Pakistan has lost a leader, and two young girls have lost a mother.

What now in Pakistan? There are already reports of riots and bloodshed? The January elections will probably be cancelled. Benazir Bhutto has been killed by Islamist extremists. Is this supposed to be a religion? I know it's a whole political model, but is it to be taken seriously as a religion, one that encourages its followers to extremes of violence and killing to meet its ends? It's not religion as I know it. Even the Catholics stopped inquisiting hundreds of years ago. In Pakistan, though, we still have religious nutters who know nothing besides bloodshed and killing to further their ideology.

Yes, WTF kind of civilisation is this?

Wey hey! My Polo Saved From the Scrappie!

Well, good news today! Repairs on my lovely little Polo have been authorised by the insurance company, for whom I have nothing but praise. That little car has served me well and I have no wish to replace it. If it takes me to where I want to go and brings me home again then it will do for me. VW cars are definitely made to last judging by the number of Polos and Golfs there are on the road, which are considerably older than my Polo.

I see no good reason to scrap a car that is in reasonable condition, just for the sake of having a newer model in the driveway. My self-esteem does not depend on the make or model of car I drive, on the range of functions on my mobile phone or on any other blatant status symbol.

I am so pleased that my beautiful little Polo will be coming back.