I was an avid watcher of "Taggart," when Mark McManus played the eponymous detective, though I can't recall even one single episode in its entirety, the plot or the characters. I do recall scenes where I recognised the urban landscape of Glasgow. "That's near the Art College." "That's at the top of the High Street."

The scene I recall most vividly is one that was filmed very near to where I grew up. On the edge of Coatbridge, a town in Lanarkshire, Scotland, the land rolls down through fields to the main Edinburgh to Glasgow railway line and the vista extends right out to the Campsie Fells: a view I was told off many times for staring at from the window of a classroom in my junior school at the end of our road.

Walk to the end of Dudley Drive, round Gartcloss Road and then head down the lane and you come to a farm. A scene from an episode of "Taggart," was filmed there and when the episode was shown on the telly, a little group of us were gathered at my mother's house to spot the scene where a car burst into flames right by one of the farm buildings. Would you believe it? Jist doon the lane!

So, there we were, all set up with cups of tea, (some of us!) cans of McEwan's, a few packets of crisps and a plate of Mammie's rock cakes. All I can remember of that show was the burning car, blazing away in glorious colour. "There it is," somebody yelled. (I think it was my brother Joseph, but it could have been any of the bunch of people squeezed onto the sofa.) And shoor 'nuff, there it was: a huge booming blast and a car roared into flames.

I vaguely recall the next bit, where the action cut to an office and a police officer said that the farmer had reported a car in flames on his land. Taggart said "Any witnesses?" The answer on screen was "No," and laughter erupted in Mammie's living room. "Nae witnesses? We wiz awe doon there! Hauf ae Toonheid wiz there!" (Translation: We were all down there. Half of Townhead was there.)

You see, word had gone round that there were television cameras setting up "ower the back," and a small crowd of locals headed down there, where a barrier had already been set up by the film crews, obviously expecting spectators. So, most of the people I was watching with had been there and had seen it all being set up. Now, they were watching the product for viewer consumption. No cameras, no director, no microphones. None of that behind the scenes stuff on view. Just the scenes from a story.

There is often a huge difference between the story we are shown and what went on behind the scenes, how the scene was set, how the show was staged.

With the Madeleine McCann case, we know the story. We have seen it often enough now over the past five years. We have heard the audio version(s) from Kate and Gerry McCann, we have read the written versions in our newspapers and we have seen the McCanns version of the events surrounding Madeleine's disappearance in their documentary. There is photographic evidence of the apartment after Madeleine had gone from it. There is the "last photo," of Madeleine with Gerry and Amelie by the swimming pool. And we are about to have version number two of Kate McCann's book.

That's the story. What we see after such an event is the story. What went into making the story is what we need to know, what the police need to know in order to find out what happened to a little girl whose name we only knew after she was gone. We don't know the before, because we weren't there when the scene was set and the story unfolded. Did the story roll like an incident we might hear about on the news, which unfortunately, in this case, wasn't caught on CCTV? Was it like a news story? "Today a car was mysteriously found ablaze at Jock MacDonald's farm just outside Coatbridge," or was it a scene that was staged for a later viewing audience? "A film crew arrived at Jock MacDonald's farm just outside Coatbridge to film for an episode of Taggart."

There is, of course, a world of difference between a staged drama and an actual event. There is a huge difference between a spontaneous happening and a scripted event. Think of the ways in which these two might be described. An event being reported would be described, probably, in the past tense. "We saw that car being brought down the lane and we saw it being set on fire," whereas the script would read, "Vehicle is positioned near the barn, petrol is thrown onto it and it's set on fire."  In both cases, there is a description and there is a timeline.

So, what of the original story as told by the people known as "The Tapas 9."? Script of report?

One of the covers torn from a child's sticker book on which the timeline was set out.

A mixture of tenses here. So, reads partly like a script and partly like a report. Note 9.20/5 which is particularly significant, I think. "Ella. Jane checked 5D. Sees stranger (with) child."

Version 2 of the timeline. Notice that in version one, male adult McCann's name is spelled as '"Jerry," and in version 2, as "Gerry." Version 2 has "Gerald," written on the bottom. So, perhaps was drawn up by Gerry?

Version 2 is written mostly in the present tense, so reads, in my opinion, more like a script. We have the added information about Russel's "poorly daughter," and Jane Tanner's experience of seeing "the abductor," is described more fully. "Sees stranger walking carrying a child."

In my opinion, I would consider that some of the above is scripted and some is factual reporting. Work out which is which and I guess the case is on its way to being solved!

And what of the scene of the drama? Stage set or images of a place where an unforeseen traumatic event unfolded? 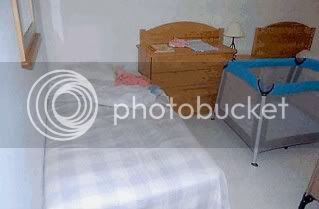 Madeleine's bedroom the day after she disappeared, showing the edges of the two cots, where the twins were said to have been sleeping that night. Madeleine's bed looks as though no one has been sleeping there and a witness stated that the cots had no sheets, just mattresses. Did the twins sleep there? And what about the headboard of the bed designated as Madeleine's being behind a chest of drawers?

Shutters jemmied? Shutters not jemmied! Window open? Well, Matthew Oldfield didn't notice on his 9.30 check, although he did get the number of windows wrong, when he said there were two! Did one of the "set," builders mess up there? If this was a stage set, which in my opinion it was, one of the stage hands didn't sort out those shutters! Action! Lights! Roll it anyway!

Were the Tapas 7, those who went on holiday with Kate and Gerry, just bystanders? Did they, like the people in my mother's house, view the story only when it was being told for the audience? Or were they extras or even key players in the drama? If there was a script, who wrote it? Who set the stage? Who was in charge of props? Who was the director?

Detective Chief Inspector Andy Redwood, who is leading the Scotland Yard team reviewing the Madeleine McCann case, is quoted as saying he believes that Madeleine could be alive somewhere, living with her abductor. Does he really think that Madeleine could have been taken from that holiday apartment in the "small window of opportunity," which was more like a medieval arrow slit? If he does, then he is watching the show through the lens of the stories told by those who took part. He's like the people sitting watching it on the telly, who never ask how the drama was produced. He needs to go right back to the production stage, bring in all the players and question them about their roles. Bring in the key players: Kate and Gerry and the rest of the Tapas Crew. Bring in the extras: the Mark Warner staff; the Smith family who saw a man carrying a child. Make sure all those people with "walk on," parts, tourists who were in Praia da Luz at the time, have been interviewed.

Lastly, re-enact the scene. Set up a reconstruction, involving all the original cast. That, in my opinion, may be the first step towards finding out if the stage was set (rather badly) or if what took place on the night of May 3rd 2007, in Praia da Luz was a very tragic and unforeseeable event in the life of two caring parents.

DCI Redwood may find that there are problems with continuity, actors being upstaged, impossible scenes of actors appearing to be deaf and temporarily blind. Reconstruction first and then interview all the actors when the impossibilities show up in the production. Then tell us again that Madeleine may be alive and living with her abductor!

Note: this blog post is not the director's final cut. More scenes will be added!