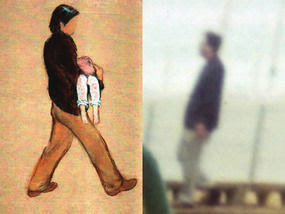 Above left: the image of the 'abductor, which Jane Tanner stated resembled the man she had seen carrying a child whom she was sure was Madeleine.

Above right: the man seen on a beach by a witness who reported that the man had been behaving strangely on the beach in Praia da Luz.

In the Sunday Express, dated May 15th 2011, Dai Davies, former Yard Commander, suggested that a reconstruction of the events surrounding Madeleine McCann's disappearance could be vital in encouraging new witnesses to come forward. There was a request for a reconstruction in 2008. What happened?

When top Portuguese detective Paulo Rebelo took over the case he was frustrated at not being able to stage a reconstruction as he believed it could provide a breakthrough.

However, at that time there were strains in the relationship with the McCanns, the so-called Tapas Seven and Portuguese police and there was suspicion about the motives of such an exercise.

So, what happened to the original call for a reconstruction from Paulo Rebelo? For information purposes on just what did happen to that suggestion, I copy here a report at the time which appeared in http://sosmaddie.dhblogs.be/, written by Duarte Levy and Paulo Reis. (10/08/08)

In April 2008, Paulo Rebelo gave a detailed response to the McCanns' friends about their arguments and doubts on the subject of the reconstruction of the events of May3rd. He stated that one of the conditions put forward by the group, that of first of all withdrawing Kate and Gerry's arguidos status - was impossible to accomplish, because only the Prosecutor held the legal power to do it, not the PJ.

On the subject of the reconstruction, the main problem for the McCanns' group of friends was clear: if the PJ believed their statements, then the reconstruction wasn't necessary, or the PJ were trying to obtain something strange with this activity.

They wanted to know what the PJ's true intentions were. After several exchanges of emails, going first through Stuart Prior, the Tapas 7 group were not convinced of the usefulness of such a reconstruction.

In the replies that followed, Kate and Gerry's friends placed as a condition, not only the lifting of the McCann couple's arguido status, but also the announcement of a press release by the PJ dispelling the lies published by the Portuguese media, emphasising that there was no suspicion about the seven friends.

As it was impossible to accept or accomplish these conditions, Paulo Rebelo, in an email addressed to Stuart Prior on April 29th, requested that a final decision was taken. Jane and Russel O'Brien were the first to respond, saying yes, but waiting for further advice from their lawyers. Rachel and Matthew sent a similar response, but stressing that they couldn't be in Portugal between May 15th and May 17th.

Diana, Fiona and David Payne also accepted, while waiting for advice from their lawyers. After the PJ's detailed explanations, Jeremy Wilkins was willing to participate, on conditon that the other witnesses were also in Portugal.

The criminal court took the decision to set a new date: 29th and 30th of May 2008. Then Gerald McCann requested a change to this new date, because his lawyer had another meeting planned before the Lisbon court, for May 29th. His request was refused because it was impossible to make a further revision of the date, due to the numbers of people involved.

On May 10th, Rachel and Matthew Oldfield sent an email to Stuart Prior, communicating their final decision to him: they would not be in Portugal to participate in the reconstruction. Russel O'Brien, also on May 10th, told the Superintendent that as he had learned that Jeremy Wilkins, the Oldfields and the Payne family had now decided not to go to Portugal, there was now no need for their presence, because the Prosecutor had said that the reconstruction could not take place unless all the witnesses were present.

On May 23rd, all seven of the McCanns' friends sent a formal reply to the Prosecutor's request for a reconstruction, saying that they would not be attending, after advice from their lawyers.

The reconstruction was therefore cancelled by the Judge for the Court of Criminal Investigation, on May 26th 2008.

Posted by AnnaEsse at 15:58 No comments: