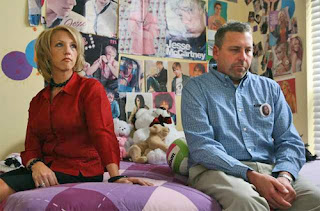 "In a novel approach, prosecutors are looking at charging a woman who posed as a boy and sent cruel messages to teen with defrauding MySpace.
By Scott Glover and P.J. Huffstutter, Los Angeles Times Staff Writers
January 9, 2008
A federal grand jury in Los Angeles has begun issuing subpoenas in the case of a Missouri teenager who hanged herself after being rejected by the person she thought was a 16-year-old boy she met on MySpace, sources told The Times.

The case set off a national furor when it was revealed that the "boyfriend" was really a neighbor who was the mother of one of the girl's former friends.

Local and federal authorities in Missouri looked into the circumstances surrounding 13-year-old Megan Meier's 2006 death in the town of Dardenne Prairie, an upper-middle-class enclave of about 7,400 people, located northwest of St. Louis.

But after months of investigation, no charges were filed against Lori Drew for her alleged role in the hoax. Prosecutors in Missouri said they were unable to find a statute under which to pursue a criminal case.

Prosecutors in the U.S. attorney's office in Los Angeles, however, are exploring the possibility of charging Drew with defrauding the MySpace social networking website by allegedly creating the false account, according to the sources, who insisted on anonymity because they are not authorized to speak publicly about the case.

The sources said prosecutors are looking at federal wire fraud and cyber fraud statutes as they consider the case. Prosecutors believe they have jurisdiction because MySpace is headquartered in Beverly Hills, the sources said.

It's still unclear who created the fictitious account. In a police report, Drew told authorities she, with the aid of a temporary employee, "instigated and monitored" a fake profile prior to Megan's suicide, "for the sole purpose of communicating" with the girl and to see what the girl was saying about Drew's daughter.

The grand jury issued several subpoenas last week, including one to MySpace and others to "witnesses in the case," sources said. One source did not know who else had received subpoenas; the other declined to provide that information.

MySpace officials could not be reached for comment, nor could Drew or her husband, Curt, be reached.

Attorney Jim Briscoe, who represents Lori Drew, said: "We have no knowledge of . . . anything dealing with a grand jury anywhere dealing with this case. . . . The only comment I have is we can't comment on rumors from anonymous sources."

The news came as a shock to Tina and Ron Meier, Megan's parents. Both said they were unaware of the grand jury and had not been contacted by the U.S. attorney's office in Los Angeles.

"If MySpace is considered the victim, fine. I don't care at this point," said Tina Meier, 37. "We've been begging for someone -- anyone -- to pick up this case. If the Drews can be charged -- and even get the chance to be convicted -- it would be a day I could be happy with."

Cyber-bullying has become an increasingly creepy reality, with the anonymity of video games, message boards and other online forums offering an outlet for cruel taunts.

Former federal prosecutor Brian C. Lysaght said such a prosecution would be "not as much of a reach as it might appear at first glance." In recent years, he said, Congress has passed a series of statutes that make criminal conduct involving the Internet federal offenses.

Still, it could be difficult to draw the line between constitutionally protected free speech and conduct that is illegal.

Laurie Levenson, a professor at Loyola Law School in Los Angeles, said the idea of using a fraud charge to tackle the unusual case was "an interesting and novel approach."

"But I doubt it's really going to lead to the type of punishment people really want to see, which is this woman being held responsible for this girl's death," she said.

Levenson, a former federal prosecutor, said that if the grand jury brings an indictment, it could raise 1st Amendment issues and questions about how to fairly enforce such a law on the Internet, where pseudo-identities are common.

"This may be a net that catches a lot of people," she said.

"The right to speak freely online is hugely important. Whistle-blowers create pseudonyms," Opsahl said. "So do many people who anonymously report on corporate or government bad practices."

In the neighborhood where the Meiers and the Drews live, protecting the 1st Amendment has not been the main concern.

Teenagers and furious neighbors have protested in front of the Drews' one-story, white house. Virtual vigilantes have posted the Drews' home address, phone numbers, e-mail addresses and photos on websites such as RottenNeighbor.com.

Tina and Ron Meier, high school sweethearts, have struggled to deal with their daughter's death; the couple is getting divorced. Their youngest daughter, Allison, now 11, splits her time between the two.

The mounting tension and heated emotions worried community leaders enough that they are having the St. Charles County Sheriff's Department regularly patrol the suburban neighborhood. Late last year, Dardenne Prairie's Board of Aldermen passed a law that makes cyber harassment a misdemeanor -- with a maximum penalty of 90 days in jail or a $500 fine or both for each violation.

A number of area communities have passed similar measures. And Missouri Gov. Matt Blunt pulled together an Internet task force, which put the final touches on a proposal Tuesday that would make it a felony crime for adults who use online technology to harass children.


I was very pleased to read the above article in the Los Angeles Times. Cyber-bullying and grooming for sex have become major problems for young people online. My Space and Bebo have given young people opportunities to create an online presence, to stay in touch with friends and to make new friends, but they have also created opportunities for the bullies and the emotional inadequates perverts sitting by their computers who cannot form meaningful relationships in the real world. These hosting companies need to take responsibility for and more control over the content of their hosted sites. The young person presenting herself on Bebo as, "Sexy*****," may be the vulnerable girl with learning difficulties who always has a teaching assistant with her in the classroom. She may be flattered by the messages she receives from males who sign up as her friends, but does she know who they are? Do parents know who their children are in touch with and possibly being influenced by?

The brilliant computer you have provided for your daughter, may be a wonderful way to help her with her school work. It may also be creating a way into your home and your life, over which you have no control and which could change the lives of your family for ever. So, what do we do? Actually, I don't know! The internet is a wonderful resource, and I do feel that being able to set up a personal web site can help a young person to grow in confidence and self-esteem. The problem is how to avoid/stop the bullies and the perverts who also find the internet a wonderful resource for being able to contact and influence young people under an assumed identity. My Space and Bebo can do something by taking responsibility, voluntarily or perhaps they will need to be forced into it. The prospect of huge financial penalties might be one way of encouraging self-policing for these online hosting companies. I shall be interested to see the results of the Grand Jury subpeonas in the tragic case of 13-year-old Megan Meier.
Posted by AnnaEsse at 14:27 No comments: