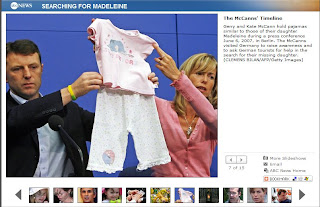 The McCanns, above, holding up a pair of pyjamas, which they said were identical to the ones Maddie was wearing when she disappeared. Note the shape of the legs and also the general colour of them, which looks to me like white, with a floral pattern. Pink? Not as far as I can make out.

This is a sketch of the abductor carrying a child that was based on one of Jane Tanner's descriptions and which she agreed was accurate. 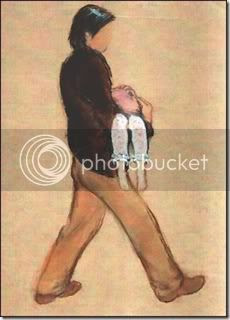 Those pyjamas have changed somewhat! For a start, do you think, looking at the shape of the garments the McCanns are showing, that the legs would not only come down to the ankles, but be so tight? I don't think so! Those pyjamas are the style that would come just over the knees or to mid-calf and the loose, baggy shape would mean that with a child being carried in the manner shown, the bottoms would ride up the legs. Also, the flowers have gone quite pink!

Here is part of Jane Tanner's comments on the Panorama programme of November 19th 2007.

"JANE: Well I could see.. I could tell it was a child, and I could see the feet and... feet and the bottom of the pyjamas, and I just thought that child's not got any shoes on because you could see the feet, and it was quite a cold night in Portugal in May it's not actually that warm, and I'd got a big jumper on, and I can remember thinking oh that parent is not a particularly good parent, they've not wrapped them up.

BILTON: And could you tell if it was a boy or a girl?

JANE: Only because the pyjamas had a pinky aspect to them so you presume a girl. It was actually quite cold."

So, Jane Tanner could see the feet and the bottom of the pyjamas? How? They would have been at least half-way up the legs, if not right up over the knees according to how the child was allegedly being carried. And pink? No, those pyjama bottoms were white with a floral pattern that doesn't look at all pink.

In Jane Tanner's original statement, she said she had seen, "..a man carrying a bundle that could have been a child." So, if she had seen feet and pyjama bottoms so clearly, how could she not be sure at that time that the bundle was a child? She actually repeats this on the Pamorama programme, in which she also describes the child's feet and pyjamas. Some kind of contradiction there?

"Describing what she witnessed on the fateful evening of May 3, Miss Tanner said: "Never in a million years did I think it could have been Madeleine. But I didn't know then.

"I just saw a person walk along the top of the road with what could have been a child in his arms."

What could have been child in his arms, but with bare feet and wearing pyjamas with a pinky aspect, so you knew it was a girl? Right! Easy to mistake a bundle of laundry or whatever for a child! Since when, though, did a bundle with bare feet poking out of pyjamas, that was obviously a girl, look like anything other than a human being?

Just one of the many puzzling contradictions about this case, but for me, it stands out as one of the most basic questions. How did the "bundleman," become the man carrying a child wearing Maddie's pyjamas? How could Jane Tanner perceive a "pinky," aspect under street lights? How come neither Jez Wilkins nor Gerry McCann saw this man? How come neither of the men saw Jane Tanner, who says she walked right past them on the pavement?

Yes, those pyjamas fascinate me! There is also, of course, the changing description of the abductor himself and what he was wearing!

Thanks to a comment from Anonymous, I have an article in which John McCann, Gerry's brother, talks about Maddie's pyjamas.

"That was terrible for them," says John McCann, Mr McCann's elder brother, who has also travelled to Portugal to help search for his niece.

"Kate dressed Amelie in her sister's pyjamas and the baby said: 'Maddy's jammies. Where is Maddy?' But she is too young to understand. And how do you explain? All we know is that Madeleine needs her family. She loves us, we love her. It is time for her to come home."

Now, if your precious child had just disappeared, would you dress another child in her pyjamas? Very strange behaviour. And which pyjamas is he talking about? The Eeyore jammies? A different set of jammies? The McCanns are holding up a set of pyjamas, which are supposed to be "like," the ones Maddie was wearing when she disappeared. I think it was assumed that those belonged to Amélie. If you look at the size of the pyjamas the McCanns are holding up and observe how small Amélie was in May 2007, would those pyjamas have fitted her?

I don't think those pyjamas would have fitted Amélie: too big. So, did Maddie have more than one pair of Eeyore pyjamas? If M&S had sent another pair to the McCanns, that's not them, because you can see by the stretched neck that those have been washed quite a few times. OK, so if they have been washed quite a few times, they must be quite old and therefore would have tripped little Amélie up at the time they were bought.

So, those must be Maddie's pyjamas and if Maddie was wearing pyjamas just like those when she disappeared, then she must have had more than one pair of the exact same pyjamas on holiday. Or what?