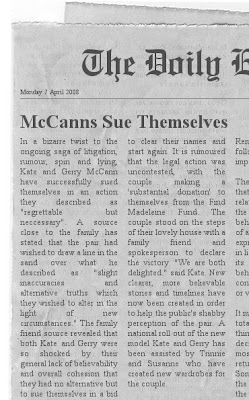 Courtesy of "Buildafiredontgetcooked" at The Three Arguidos Forum.
(Click on the image to enlarge!)
Posted by AnnaEsse at 22:09 No comments: 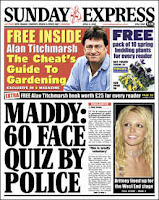 On the right is an image of the front page of the Sunday Express, which I have just bought from my local newsagent's. I managed to bag the last copy from the rack at, "Lee's News And Booze," though I think the sell-out may have more to do with the free plants and Alan Titchmarsh book offers than with, "MADDY: 60 FACE QUIZ BY POLICE."

The Maddy story was available in the online edition ot the Sunday Express in the wee hours, or should that be hour after midnight. By 1.02am, a poster on the 3A forum was reporting that the article had gone...whoosh clucked! Still, those intrepid investigators at the 3A have saved the original!

"As arguidos, or official suspects, the couple have the right to demand that certain individuals be seen by police if they are believed to hold relevant information. Despite plans for the Portuguese investigators to return home on Friday, British police will mount a full-scale operation in which more than 50 more witnesses will be interviewed. These will include other guests who were staying at the resort, Ocean Club apartments staff and holidaymakers staying nearby."

Later in the morning, another article appeared on the Sunday Express site, "TAPAS SEVEN FACE NEW MADELEINE QUIZ" but a search later found this message, " ARTICLE MISSING The article you are looking for does not exist. It may have been deleted." Whoosh cluck! Another one gone! I didn't read anything in either of those articles, which could be construed as libel and the comments posted by the Express all seemed rather circumspect to me, but hey, when that mighy whoosher gets going, things disappear! (Disclaimer: I am not intending to identify any person as the, "mighty whoosher.)

I see that the article published in The People is still online. KATE AND GERRY MCCANN TO BE CLEARED

That's the headline, and it looks very definite. Reading further, though, we encounter some rather more conditional words, like, "may well be."

"A highly-placed Portuguese legal source told The People last night: "I can confirm a review of the case will be concluded next month. It may well be the case that Kate and Gerry's arguido status is about to be dropped."

I wonder why the People's article didn't get whoosh clucked!

Now, for those who don't know the origin of the, "Whoosh cluck!" expression, here is a short video for your entertainment!