"A claim that the lover of Madeleine McCann suspect Robert Murat had herself been made a suspect in the case was denied today.

Tabloid 24 Horas reported that Michaela Walczuch was named an arguida - or official suspect - in November and that her alibi is still being investigated by Portuguese detectives.

But today Portuguese police officials denied the story and Mr Murat's lawyer Francisco Pagarete said only his client was an official suspect in the case."

"Mr Pagarete, who has spoken on behalf of Ms Walczuch, told 24 Horas: "In the eyes of public opinion, they both became arguidos in a crime they did not commit. Neither of them is free of suspicion, with all the material and psychological damage that a dramatic situation like this implies. Somebody will have to pay for this."

Mr Pagarete added that Mr Murat will sue the Portuguese and British authorities. Madeleine was three years old when she vanished."

I hear that Mr Max Clifford is waiting in the wings to aid Robert Murat once Murat's arguido status is lifted!

Posted by AnnaEsse at 13:24 No comments: 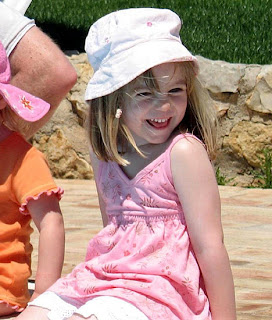 First thing each morning I go to the Daily Mirror forum's web page, with a mixture of hope and dread, to read the latest news on the Madeleine McCann case. Why the DM forum? Because there are Portuguese people posting there who translate the news being reported in the Portuguese press, which is often not available until much later in the UK press, if at all.

This morning, courtesy of a poster called Li, we have details of an news item in Correio da Manha.
For those who read Portuguese, here is a link to the original.

For the rest of us, here is the translation, with thanks to Li.

Blood in the flat and in the car confirmed

The final result of the tests that arrived recently from England do not leave any doubts to the researcher of the Criminal Police. The blood found in the McCanns car is from Madeline as well as the vestiges detected in the house rented by the British and from where the three years old child disappeared without a trace. "

" The front cover of the newspaper says:
Confirmed blood in the flat and in the car
Final results of the British laboratory
The risk of confusion between the genetic profiles of the twins and Maddie was eliminated."

I say that I read the news with a mixture of hope and dread because somehow I still retain a vestige of hope that Madeleine is alive somewhere and will found and she will go home. At the same time, I dread that she is dead and will never be found and laid to rest and also dread that she will be found and what is revealed will be details of a death which shocks to the core of what I want to believe about parents.

Also on the DM forum this morning, lullaby reports that the information about the results from FSS has been given out on Portuguese TV news. (RTP) If this is true, then it would seem to be valid confirmation of the news reported by Correio da Manha.

DM forum poster, mrsseagull, has provided a translation of an article in, "24horas."

According to this article, Michaela Walczuch, described as ex-girlfriend of Robert Murat, was given arguida (formal suspect) status in November, 2007. This seems to be in contradiction to information published by the UK Daily Star and other newspapers in November.

Writing about Metodo3, the agency hired by the McCanns;

" THE £2,000-a-day private eyes hired by Madeleine McCann’s parents to find her were dismissed by police last night as “irrelevant small fry’’.

The police detectives scoffed at the private eyes’ claim they “know who the kidnappers are’’ and were “very, very close’’ to catching them.

And they insisted Robert Murat’s German girlfriend – who the investigators allege is linked to Madeleine’s disappearance – was not a suspect in the case."

"Michaela dismissed the private eyes’ allegations as “ridiculous’’ and plans to sue them. Murat, an ex-pat Brit estate agent, remains a suspect, but his mum insists he was with her the night Madeleine vanished. Police have so far found no evidence to link him to the youngster’s disappearance. "

An interesting detail from the 24 horas article, as translated by Li.

The employees of the Tapas Bar, according to what 24 Horas discovered, guaranteed to the inspectors of the PJ that Jane Tanner was always in the restaurant and that only O'Brien and Gerry McCann and his wife Kate were absent during dinner. O'Brien has never entered in the flat where Maddie slept with the twins as this is stated in the deposition that he gave to the authorities. Jane Tanner only left the restaurant when Kate appeared screaming: They've taken her."

We are being told here that Jane Tanner never left the restaurant, so that she could not have seen Eggman, Bundleman, the man carrying a child in Madeleine's pyjamas. If Jane Tanner had been wandering around in PDL and observing a, "swarthy," man carrying a child, from her statement about where she was when she saw him, she must have been close to where Gerry McCann and Jez Wilkins were having a conversation, but neither of the men saw Bundleman or Jane.

Our very own Daily Star has picked up today on the remarkable similarity between Robert Murat and David Payne.

" WITNESSES who say they saw suspect Robert Murat outside Madeleine McCann’s apartment on the night she vanished may have named the wrong man. The 34-year-old ex-pat has always denied claims that he was just yards from the flat where the little girl was last seen – and now police believe he could be telling the truth. Detectives think Murat could have been mistaken for one of the McCanns’ friends, 41-year-old medical researcher David Payne. And they say witnesses who claim to have seen Murat actually spotted Mr Payne out searching for the missing four-year-old."

I will end here by mentioning a second article translated by Li from 24 horas. This article reports that Michaela Walczuch,

"..........was heard as witness and became a suspect in Maddie's case
Murat's girlfriend is also an arguida
Michaela Walczuch is suspected of being allegedly involved in the child's disappearance. Her alibi is being investigated by the authorities "

Whether Michaela Walczuch has arguida status or not, the investigation into the disappearance of Madeleine McCann seems to be nearing a resolution and conclusion. As many of the posters on the DM forum say; justice for Madeleine.

Posted by AnnaEsse at 10:03 No comments: