Anjem Choudary talks of 7/7 and states that only Muslims are "innocent."


Anjem Choudary is the leader of Islam4UK, the Islamic group that is planning to stage a protest march through Wootton Bassett. Here, he is discussing the London bombings of 7/7 and refusing to condemn the actions of his, "Muslim brothers," while implicitly stating that since only Muslims are "innocent," and all those people who died or were seriously injured on the tube trains and on the London bus were legitimate targets.

This is the person who claims that all he wants to do is honour the Muslims who have been killed as a result of the war in Afghanistan.

"They Shall Not Pass." 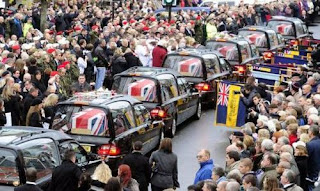 Above: hundreds of people line the streets of Wootton Bassett as coffins carrying the repatriated dead service men and women from Afghanistan pass through.

Islam4UK, an Islamic group linked to the extremist organisation Al-Muhajiroun is planning a march through Wootton Bassett in the coming weeks in memory of Muslims, "‘murdered in the name of democracy and freedom’. There's something quite ironic there.
Islam4UK's leader, Anjem Choudary, said the protest, involving 500 people, would be ‘peaceful’ and that ‘symbolic coffins’ would be carried to honour Muslim victims of the conflict.

"But Chris Wannell, the Wiltshire town’s former mayor, said: ‘We don’t do what we do for any political reason but to pay our respects to those who have given their lives for our freedom.

‘We are a Christian country and a traditional old English market town who honour very much our Queen and country. We obey the law and pay respects to our servicemen who protect our freedom."(Daily Mail)

Now, I'll come out here and say that I am a pacifist and that I particularly see no sense in the original reasons for invading Afghanistan or for the continuing conflict there. However, I have known men and women who have served in the armed forces, most of whom have joined with very good intentions and a belief that they were defending the freedoms we in the west enjoy and possibly helping people in countries who did not enjoy those freedoms. I have also, as a teacher, known young people who intended to join the armed forces, some because they saw it as a way to gain training for future employment and as a way to travel and see some of the world, some because they couldn't think of any other way to leave home, most with a sense of doing something honourable and decent.

The people who turn out time after time in Wootton Bassett to pay their respects to the British service men and women who have been killed in Afghanistan could be honouring one of my ex-students, young people who went where they were sent and died for a cause that I don't believe is worth dying for, but I think they and their families and the people of Wootton Bassett should not be insulted by this planned march.

On October 4th, 1936, an event took place in London, that came to be known as, "The Battle Of Cable Street." Oswald Mosley and his British Union of Fascists planned to march through Stepney, the area with the largest Jewish population in England.

"Their way was blocked by thousands of demonstrators, made up of communists, Jews, dockers and labourers from the local community.

They flooded the narrow streets, making them impassable. They carried banners and chanted "They Shall Not Pass" a slogan adopted from the Spanish Republicans." (BBC)

This planned demonstration by around 500 people from Islam4UK must not be allowed to happen. Those of us who feel that the dead from a futile war should be allowed to travel in peace to their final resting place and that the route of their final journey should not be tainted by hate must come together now and echo the words of those ordinary folks of East End London.

"They shall not pass."