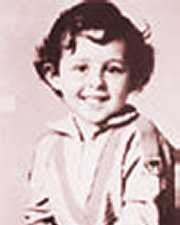 From the blog of Georges Moréas.

On October 16th 1984, Grégory Villemin, aged four and a half, disappeared from his parents' house in Lépanges-sur-Vologne, in the Vosges. In the evening, his body was found in the waters of the Vologne, in Docelles, six kilometres from his home. His legs and arms were bound by a rope and he had drowned. No trace of violence on the little body

On the evidence, he had been thrown into the river alive - as a cat would be drowned. Suspicion fell on the family. The next day, the child's father, Jean-Marie Villemin, received an anonymous letter: "(...) Your money could not give you back your son. This is my revenge, poor con...."

Two weeks later, the Epinal judge, Jean-Michel Lambert, issued a warrant against Bernard Laroche, a cousin of the Villemins, who was the object of a denunciation by his own cousin, aged 15. What a family! In February 1985, the judge freed him, and one month later the Villemin father shot him with a shotgun. But the rumours took off. They accused Christine Villemin, little Grégory's mother. In highbrow ramblings, Marguerite Duras hammers home the point. Convinced of her guilt, she wrote in Libération that that it was a "sublime, inevitably sublime," crime.


For a long time, the PJ were kept out of this case. Would their investigators have done better than the gendarmes? Commissioner Jacques Corrazi, who later took over the case, was probably convinced of it. He might have managed to curb the delirium of a low-ranking judge whose peers said it was a "mental tightrope." Christine Villemin was subsequently placed under investigation for the murder of her son. On February 3rd 1993, the Dijon criminal court concluded that there was no case against her, and the case was dismissed. Little Grégory's killer has never been found.

Twenty-four years later, can forensic science succeed where the gendarmes, the police and the courts have failed? In deciding to re-open the investigation, the Dijon Court of Appeal must consider that the sealed items, which have apparently been carefully preserved (clothing, bonds, poison-pen letters...) could now bring valuable evidence, notably thanks to DNA traces.

This is, I believe, a first in France. Which renews our interest in the genetics file. *

Note: is this what M. Moréas is referring to above? Le FNAEG (fichier national automatisé des empreintes génétiques)

Posted by AnnaEsse at 20:05 No comments: