Retardo3 Do it Again!

A brief quote from a Spanish newspaper today.

Madeleine is not in Morocco or Bosnia or Belgium and she is not at the bottom of the lake. She's in Spain (again!)....or maybe Belgium, according to the latest theory from Metodo3, the agency hired by the McCanns.

"The private detective agency from Barcelona Method 3, contracted by Gerry and Kate McCann, are investigating thoroughly the Costa Blanca, from Valencia to Alicante. According to Francisco Marco, head of Method 3, Madeleine was selected by "spotters" in circles of paedophiles and then abducted "to order". She was later carried via Morocco to Spain or Belgium, a country with a sad record on child prostitution. "

(The above unashamedly lifted from the DM forum, with thanks to, "Ern.")

Well, we've recently had hordes of witnesses turning up after eight months, claiming to have seen Madeleine in the clutches of Robert Murat's girlfriend, to have seen Bundleman, or to have seen a child just like Madeleine somewhere in the world. All seem to have been dismissed by the PJ as not credible or have been investigated and not useful and the body in the lake was reported and dismissed some time ago. I suppose if you're being paid £50,000/month, you've got to come up with something, especially if your company has moved to plush new offices! And well, the PJ may be arriving in the UK any day, or if the rumour on the DM forum is true, the PJ flew into Birmingham airport today, Tuesday, around lunchtime. So, I guess there might be a bit of panic brewing and the need to come up with something!

Let's hope the PJ will be interviewing the Tapas Crew very soon. Two new arguidos could be named? Wonder who? I'll put my Pennies Jar on Jane Tanner and Russell O'Brien, based on JT's changing stories, the tapas staff member saying she never left the table and Russell O'Brien's having been absent from the table most of the evening and if JT is involved, then I don't see how he could not be, or at least not know about it. So, folks, there's probably about a fiver in my Pennies Jar. Wonder if the local bookies if offering odds!

Posted by AnnaEsse at 22:46 No comments:

Well worth watching. Video clips of the apartment, the path where Jane Tanner said she saw Bundleman and the route to the Oean club and the tapas bar.

Ocean Club Apartment Clips
Posted by AnnaEsse at 22:27 No comments: 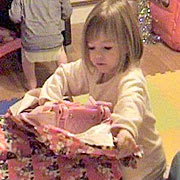 From the blog written by Paulo Reis, Gazeta Digital, 15the January, 2008

"A spokesman from Eurojust confirmed to The Press Association that Portuguese authorities made a formal request to the European Union’s judicial cooperation agency to help in the process of questioning again the group of British citizens that was at Ocean Club, with Gerry and Kate McCann, when Madeleine vanished.

A PJ team is scheduled to fly to UK, soon, to follow the questioning by Leicester police, according to Press Association. Eurojust role is to help investigators and prosecutors in European Union for information and assistance in crime cases involving more than one country."

No evidence of Canary islands connection to the Madeleine case.

"The line of inquiry in Madeleine’s case remains the same and is focused in the group of British citizens that were with the child’s family. There is no indication that the person arrested in the Spanish Islands has been in Portugal”, according to the same source."

Also on 14th January, Paulo Reis asserts that two more people could be named official suspects, arguidos, and that without diplomatic intervention the McCanns would not have been allowed to leave Portugal in September, but would have been arrested and charged.

"If it wasn’t the diplomatic intervention, the McCann wouldn’t be authorized to leave Portugal and would have been charged and arrested on September”, a source from Polícia Judiciária said. With the bureaucratic aspects for a new questioning of the Tapas Group finished, Police admits that two more formal suspects could be named, “if the questioning takes place as we expect."

Paulo Reis quotes a police source as saying that the McCanns publicity campaign was intended to draw attention from Praia da Luz, where, the PJ believe the answer to the disappearance of Madeleine MCann is to be found.

“The campaign set up in the Media, since the beginning, was planned and had a specific intention: to take the case out from Praia da Luz,” the PJ source said. This intention was already clear months ago, on July last year, when detectives in charge of the investigation told the Portuguese Press that “all clues related to foreign countries have been investigated and dismissed”. At the time, it was also clear to PJ that “the key to solve the case was at Praia da Luz.”

There has been speculation on vaious internet forums about the possible date for the arrival of the PJ in the UK. There has also been speculation that no one is coming, but according to Gazeta Digital and The Peterborough Telegraph, (quoting the Press Association) it has been confirmed that Eurojust has been approached and that the PJ will be arriving on our shores pretty soon!

They are understood to be poised to fly to the UK to sit in on fresh questioning of the friends by British police.

The seven were on holiday in Praia da Luz in the Algarve with Kate and Gerry McCann when their daughter vanished last year."
Posted by AnnaEsse at 21:49 No comments: