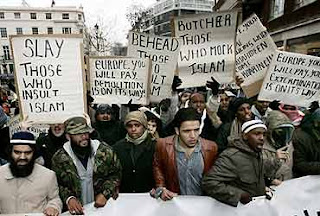 Government security experts have drawn up a 20-page document detailing how to deal with the expected fall-out of the anti-Koran film being made by MP Geert Wilders, the Volkskrant reports on Friday.

The paper says the document, marked 'state secret' has been circulated to need-to-know ministers only.

There are also instructions for diplomatic staff so that they will be ready to deal with protests and embassy evacuation plans have been drawn up, the paper says.

Ambassadors in Islamic countries are currently talking to their contacts about the film. While stressing that freedom of speech is an important in the Netherlands, they are also making it clear that Wilders’ opinions are not shared by the government, the paper says.

The film is due to be screened at the end of the month.

Whether the Wilders' film is aired on TV, Wilders' web site or YouTube, I guess we can expect to see the Islamic hordes taking to the streets of Amsterdam and possibly other cities in the Netherlands, as well as cities in Islamic states. We can expect to see those hordes burning flags and effigies and torching embassies. Those who would deny freedom of speech and opinion to others are not usually slow to express their hatred with the confidence their religion gives them to threaten and to kill in the name of that religion.

Wilders' film, in my opinion, will seek to show that embedded at the very heart of the Muslim religion is hatred for all people of other faiths and clear instructions from the Prophet Mohammed to annihilate any and all who do not bow in submission to Allah.

Video of Wafa Sultan in which she talks about a, "A clash between civilisation and backwardness."

(Wafa Sultan is a psychologist who lives in Los Angeles.)

Posted by AnnaEsse at 14:57 No comments: