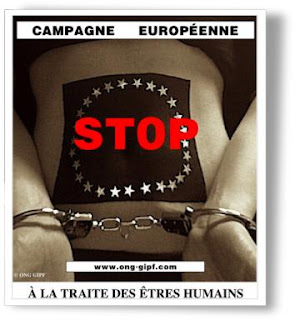 Given the extent of the phenomenon of sexual exploitation, adults as well as children, at European and international level, it seems essential to us that the whole international community (civil and governmental) can unite around one day. A day to mobilise, sensitize, inform governments, institutions, the public, about the scourge of sexual exploitation. This is why on 4th March 2009, GIPF will launch the first World Day of Struggle Against Sexual Exploitation.

You are invited to become an active member of that day. Membership is totally free. We would like this day to be taken up by as many countries as possible. That is why you are invited to observe this day with a focus of information on the problem of sexual exploitation.

For France, we are currently contacting all representatives to inform them of this initiative, and to request their support for this day to be recognised at national level. You could also send an email to your government to request national recognition for the day.

The objective of this day is to collectively denounce one of the worst forms of denial of basic human rights, but also to pool resources in order to put an end to this traffic!
Exploitation of any kind, is basically one of the most abject abominations of the human being and sexual exploitation, rendering the bodies of victims as simple merchandise, goods that can be bought or sold at will, is its most repugnant expression! The unbearable here is the abuse and contempt for the other person, her total submission, making her feel inferior, dehumanising her.

The link between sexual exploitation and prostitution is not stressed, while it is obvious that the sex industry is organising it and to a great extent absorbing the victims: 90-95% of prostitutes, (world average) are victims of trafficking!

Prostitution trivialises the sexual enslavement of women and reinforces the image that they are simply exchangeable goods to be accessible and available to all men at all times, everywhere. Patriarchal culture rests on the principle that the sole duty and power of women lies in the art of sexually satisfying men in marriage and in sexual exploitation.

Liberalisation benefits primarily the pimps, the dealers, organised crime in general, clients for whom it matters little that the sexuality is a mechanical act, devoid of reciprocity and all responsibility, the main point being that everyone, whatever their social status, can buy power over a woman.

On average, victims are recruited at around 13 years of age, made vulnerable by the violence of their environment, poverty, unemployment, drugs. The majority of them are subjected to a forced breaking-in by the pimps or the street gangs aimed at depersonalising them to the point where they don't have the ability to act or even to think for themselves.

Every year around the world:

Globally, the main human trafficking movements are the following:

What the figures show is that in the space of thirty years, the phenomenon of human trafficking, notably for sexual exploitation, has evolved considerably. The most disturbing changes are linked to its industrialisation, its globalisation, its distribution through armed conflict, and the adaptability of the traffickers.

What the figures don't tell us about is the trivialisation of the phenomenon, to the point where we are witnessing, in France and elsewhere, the use of codes related to human trafficking for advertising purposes. A trivialisation with serious consequences for the victims. It is imperative that the fight against prostitution and the trafficking of human beings takes on a new dimension and transcends borders.

Globally, the legislative responses to the issue of prostitution are very disparate. The prostitution networks benefit greatly from these legal disparities: what is prohibited in one country being allowed in others. And even in countries with similar approaches, definitions of charges differ, which prevents indictment and blocks the legal process.

The fight against organised crime represents a major challenge at international level. There is a lack of knowledge about transnational trafficking, and in particular about human trafficking. It is obvious that globalisation facilitates legitimate trade, but it is a boon for illegal movement. It is necessary to understand the extent of this unacceptable trafficking and to consider the role played by states in this.

A world divided. Sweden on the edge.

Sweden has followed a totally different path, where the act of buying sex is punished by the law. This law, adopted in January 1999, has been in the pipeline since 1975. Starting from the principle that prostitution is not compatible with human dignity and in accordance with the Convention of December 2nd 1949 for the suppression of human trafficking and exploitation by the prostituting of other people; which says explicitly: "Prostitution and the evil that accompanies it (...) are incompatible with the dignity and value of the human person. Sweden has implemented the simplest and most accessible method for striving towards its abolition: break the market by removing the customers.

(Comment: I really like the Swedish approach. No customers, no demand, no trafficking of human beings. I am not naive enough to believe that there is no prostitution behind closed doors, and just marketed differently, but hopefully there is a lot less of it than elsewhere and therefore not so much profit potential for those who might seek to benefit from procuring women and young girls. The Swedish system does not punish the victims, but those who create the market in which exploitation can thrive.)

Governments can no longer have an ambiguous attitude, because recall a single figure: each year 4 million women and young girls are sold....

So, in order to comply with the Convention of December 2nd 1949 for the suppression of human trafficking and the exploitation of prostitution, intolerance of human trafficking for the purpose of sexual exploitation must be a priority and the purchase of sexual services punished by the law. The Swedish model should become the reference model for this international fight.

DOING NOTHING MAKES US COMPLICIT!!!

Many associations, non-governmental organisations and institutions are fighting against this phenomenon of exploitation, but faced with the significant increase in recent years, it is essential to combine our strengths and unite ourselves to denounce this crime against humanity, as expressed in the Statute of Rome governing the International Penal Code.

Article 7: For the purposes of this statute, a crime against humanity is taken to mean one of the following acts committed in the context of a generalised or systematic attack launched against a civilian population and with full knowledge of that attack:

March 4th World Day for the Struggle against Sexual Exploitation.
"Because women's bodies are not for sale,
Because the price of life should not be the negation of itself.
Because a minute of pleasure should not be synonymous with annihilation.
Because behind every victim there is a destroyed human being.
Because they never forget,
that to satisfy a fleeting desire,
men buy them.
Taken as objects, common commodities,
Because women's bodies are those of life,
Because respect and protection of human rights must be a priority
This Day is one of union under the sign of hope
So that never again will a tear flow down a face,
An expression of sadness, and shame,
So that life finds meaning!"