Madeleine McCann: the Christmas appeal from her parents.

Now, I know I must be sounding unsympathetic to their plight, but this is just a money-grubbing exercise at the time of year when folks out there are thinking of other people less fortunate than themselves and are in the mood to give to worthy causes.

"Kate and Gerry McCann have issued a fresh appeal for help in finding their missing daughter Madeleine as they face spending a third Christmas without her."

Third Christmas without Madeleine? Well, actually, if we're counting, it's the fourth, because at Christmas when Madeleine was 2 years old, in 2005, Madeleine spent Christmas with her grandmother, Eileen Mccann, while I assume the rest of the family enjoyed the twins' first Christmas back at Rothley Towers.

"Eileen said: "Madeleine was in my heart from that very first day.

"She was born on a Tuesday and I went down to see her on the Friday.

"I felt I had a really special bond with her.

She said: "When she was two, Madeleine spent Christmas at my house and it was lovely.

So, Madeleine wasn't at the festive table that Christmas. Seems odd to me that she wouldn't be part of the twins' first Christmas, but then I find such dates and events memorable and special and well worth the effort that has to be put into them when you have small children.

"In an emotional plea greeting visitors to the site, they said: "There will be a spare place at the Christmas table again this year. If you know anything - do the right thing and help us fill it." (Daily Express)

From what I can gather, there's been a spare place at that table before, not just at Christmas either. Early on in this case, Kate McCann, asked about how the twins were coping with Madeleine's disappearance, said that they were ok because they had never spent much time with Madeleine. So, I guess there weren't many lingering meals en famille then?

"Mr and Mrs McCann added: "There's only one thing Madeleine wants this Christmas - and that's to be back home. If you know where she might be, please help." (Daily Express)

If Madeleine is still alive somewhere, being treated like a princess, or as Kate McCann said in an interview for Spanish TV, "in somebody's house," I seriously doubt that were she to turn up to sit at the Christmas table, that she would just slip happily into the family fold and joyously tuck into the roast turkey. A child who was suddenly taken from her family in the trauma of a night time snatch, from where she had been left sleeping, and kept apart from that family for nearly three years, would be an emotionally distressed child, returning to a house she did not recognise any more, siblings she had hardly known before and who would now be strangers, and parents she hardly remembered, who would also have changed in the intervening years.

And if, God forbid, Maddie is alive and in the hands of paedophiles, as her parents have suggested so many times, then that place at the table would not be the most appropriate place for an abused child's introduction back into the arms of her family. Have a slice of turkey, Madeleine, and forget that you were abused in every imaginable way, after we left you alone in the dark in an unlocked apartment. Let's all join hands and sing Kumbaya. Somehow, I don't think so! 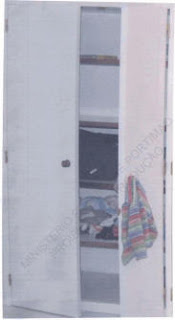 Thanks to a few helpful folks, who suggested where I might find the appropriate photos, I now have the photo from the PJ files of the inside of a wardrobe in apartment 5A, the McCanns' holiday apartment in Praia da Luz. This is one of the images from the PJ's first visit immediately after Madeleine disappeared. As you can see, there is a rather large holdall, which could be described as a sports bag, sitting on one of the shelves.

The photo is from the following section of the PJ files:

And is reproduced here from Pamalam's web site:

So, we know that a bag of the relevant size and description did exist, whatever the McCanns, their spokesperson or a source close to the family might say. Gerry McCann never owned such a bag? Well, Gerry, did that one take up residence in your wardrobe when you weren't looking? Someone put that bag there and someone removed it. So, who did? And Gerry, I'm not going to ask the dogs!