Enfants Kidnappés 12/08/08: It's not Madeleine in Molenbeek, Brussels.

Another excellent article from the Association Enfants Kidnappés about the little girl seen by the security guard at a bank in Molenbeek-Saint-Jean in Brussels. I think the British press is finally catching up with the, "Breaking news," that actually appeared in the Belgian media at around 11pm on Monday.

It's not Madeleine, contrary to a certain press. We are going to give you a little reminder of some real facts, as they happened, without all the modifications and inventions of the press.

On Monday August 4th, the security guard, Alain, employed by the Securitas company and seconded to cover security at KBC's administrative headquarteres in the Avenue du Port, Molenbeek-Saint-Jean, one of 19 urban areas of Brussels, was in his post in front of the bank towards 10.30 in the morning. His attention was drawn to a young woman and a little blond girl walking past the bank. The little girl was blond and the woman with her seemed to be North African. His gaze followed the, "strange pair," the woman and the little girl made. It wasn't until two days later that he would inform his superiors. The latter immediately called on the services of the police.

Alain stated to the police:

"I was working at the front of the branch. I noticed this little blond girl, accompanied by a woman of Moroccan origin. I was immediately struck by the obvious difference between the girl and that woman. I was drawn by the words of the little girl, who said, as part of a sentence, that I didn't hear the beginning or the end of, "...I GO BACK..." (Editor's note: and not, LET ME GO HOME as stated by a certain bad press!!)

The little girl was dressed in a white shirt, over which she was wearing a white sweater. She had on a dark grey skirt with a tartan checked pattern. Below her skirt, she was wearing white stockings and shoes. The little girl had very clear blue eyes, very clear. As I was mostly paying attention to the little girl, I didn't get a very good look at the woman who was with her. However, I can tell you that she had brown eyes. I didn't see her hair, but she was wearing a scarf on her head. She was dressed in quite a modern fashion. After they had gone past, I went back into the back. I didn't manage to remember where I had seen that little girl before. The next day I was on leave. As this little girl was going round in my head, I did some research on the internet. That was how I came across photos of Madeleine McCann. I then thought I had recognised the little girl. I wasn't sure. First of all I told myself that it wasn't possible, that I must be mistaken. But as time went on, my conviction grew. On my return to work, I informed my superiors. They contacted the police.

On arrival, the police proceeded to questioning Alain V. the bulk of which is detailed below. Then the police officers looked at the 5 videos captured by the surveillance cameras. One of the police officers there suggested asking the area inspector if he knew anyone in the area who might look like the little girl. The report was prepared and all the details were sent to the Missing Unit of the Federal Belgian Police. At that time, the press were not aware of the guard's witness statement. Not for long....

Getting to the bottom of the case.

Following the SOS Madeleine article about the guard's witness statement, the British press, who were seeking at all costs to discredit Belgium in the eyes of their readers, making Belgians out to be people who wallowed in prostitution and as paedophiles satisfying our fantasies with children, grabbed hold of the case. From then on there were journalists from various tabloids in Brussels: News of the World, The Mail, The Daily Mail and the Mirror. Only the, "SUN," went to Ghent instead of to Brussels. Strangely, the, "SUN," was accompanied by a member of the Missing Unit of the Federal police who guided them through what had taken place in the incident at KBC. The next day, the, "SUN," published online the 5 videos of the case which were intiially sent to the Missing Unit of the Federal Police. According to our information, the, "SUN," paid 40,000€ for these videos.

Then, the,"SUN," resold them to SKY News for the tidy sum of 100,000€. Still according to our information, the purchase of the videos was made through the intermediary of someone whose son had done a work placement in the UK with the, "SUN," and the father (whose identity we are not going to disclose) was very close to the investigation. Thus, for money, he would have leaked information and sold documents in violation of the article of the Belgian Penal Code on professional secrecy to which the police are bound! From then on the press jostled with each other in Molenbeek. The Mirror even had three teams, one of whom had the task of following the, "SUN," team and to be right behind them everywhere. At that time, the newspapers disinformed the public by disclosing false information. Thus, the, "SUN," stated that: "The Belgian police recognise that it could be Madeleine."

Absolutely false information since at that time, the investigators already knew that it wasn't Madeleine. The Daily Mail journalists did interesting work. They went into all the shops and cafés in the area around KBC and placed posters with photos of the woman and the little girl, bearing their telephone number. These posters bore fruit. The little girl's father became angry when he saw photos of his daughter plastered all over his neighbourhood. He went home. He got onto the internet. He saw the images disclosed by the, "SUN," and he immediately understood the importance of the matter and went to the police. The young pregnant woman who was with the little girl was none other than her nanny.

Note that the guard's statement was in good faith. He was not seeking to attract attention. As you look at the videos, you can't help being worried by a certain resemblance in appearance. In addition, the little girl indeed speaks English. We have seen the little girl and the resemblance with Madeleine is truly striking. We would have fallen into the trap ourselves.

SOS Madeleine McCann: the little girl seen in Molenbeek was not Madeleine 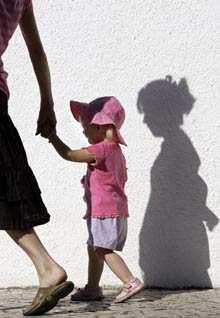 At this moment, around 10.15am, Tuesday 12th August, this is what Sky News is still saying,

"Police are studying CCTV footage of a young girl resembling Madeleine McCann walking with a woman in Belgium."

The major Belgian news journals are carrying the story that the little girl has been identified and that she was with her nanny. Her father contacted the police and his identity and that of his child has been verified by the Federal Prosecutor.

According to official information from the Belgian Federal Prosecutor, the little blond girl seen last Monday, August 4th, near the headquarters of the KBC bank in Molenbeek-Saint-Jean (Brussels) was not the little British girl Madeleine McCann.

It was the little girl's father who contacted the police after seeing the video surveillance images, disclosed by the British newspaper The Sun.

The Belgian police had opened an official investigation after having received information from the security company, Securitas Information, that one of the building's security guards had seen a little blond girl, resembling Madeleine's description.

The original information, exclusive to SMM, put forward that the security guard stated that he had seen a little blond girl, speaking English, aged around five or six years, accompanied by a woman of North African origin.

"The little girl's father saw the images for himself and went to the missing person's unit," explained Lieve Pellens, spokesperson for the Federal Prosecutor, adding that, according to the father's statements to the police, the little girl was only in Brussels that day with her nanny.

Journalists have not lacked ingenuity.

The importance placed by the Belgian authorities on the witness statement from the security guard - who had acted in good faith - took several British daily newspapers to Brussels. The daily, The Sun, in disclosing the video surveillance images, allowed the rapid resolution of this lead. The police had started a local investigation, notably with neighbourhood officers, in the hope of finding the little girl in the Molenbeek-Saint-Jean area.

Meanwhile, the British journalists were not lacking in ingenuity to find the little girl: the Daily Express team had even distributed posters in the shops in the area, showing the photo of the little one and her nanny, while The Sun found a second witness, who confirmed what the security guard had said concerning the resemblance between the little girl and the face the public knows as Maddie.

It wasn't Madeleine at that bank in Brussels!

The little blond girl seen last Monday at a bank in Brussels was not the little British girl Madeleine McCann, was stated on Monday evening by the Federal Prosecutor who had identified the father of the child seen in Molenbeek and filmed by the surveillance cameras.

"The child's father, himself, saw the images and went to the missing person's unit," Lieve Pellens, spokesperson for the Federal Prosecutor confirmed for the BELGA agency.

Well, there you have it! All those UK newspapers going a bundle on that story, all those videos on web sites, Clarrie sending the images to the USA to be enhanced! Yet another false alarm!

Still, plenty more to be checked out; quite a few more in Belgium, Amsterdam, and I believe, Venezuela!!!
The only missing child to be seen on all five continents, and sometimes on the same day at the same time.