Léonor Cipriano - doctor states that the photos do not correspond to the injuries. 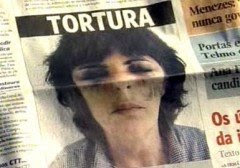 The Léonor Cipriano case: the sound does not match the picture.

According to the doctor at the Odemira Health Centre, where Léonor Cipriano had been examined a few hours after the alleged assaults by PJ inspectors, the details he recorded at the time of the examination do not match the bruises seen in the photos presented to the court in Faro.

The resumption of the trial of the five PJ inspectors, accused of acts of torture against Léonor Cipriano, who was sentenced to 16 years in prison for her daughter Joana's death, has thus been marked by a new witness statement that calls into question the authenticity of the photos.

"What I saw was a single, very heavy knock, to the right side," the doctor stated, stressing that it would be possible for the bruises to the left side of the face to have been done before his examination. According to the explanation given to the doctor by Léonor, the presenting injuries to her face at the time of the examination were caused by a deliberate fall down the stairs, after her interrogation.

This is not the first time that the authenticity of the photos, taken at the prison, has been called into question, because they show a Léonor Cipriano with bruises to both sides of her face, in particular to her eyes.

A digital analysis, carried out by legal experts at the request of the inspectors' defence, had already stressed the lack of reliability of the photos. Their low resolution, the absence of date or time, rendered complex analysis impossible.

A former cell-mate of Léonor Cipriano, in statements exclusive to this blog, had already confirmed that LéonorCipriano was indeed assaulted in the prison after her return from interrogations by the PJ.

"The bruises on Léonor Cipriano's face were not done by the inspectors (of the PJ) ..she was well pasted in the prison after she arrived. In prison nobody likes child killers," this former cell-mate of Joana's mother confirmed, about the assault within the prison, stressing that there were never so many bruises on Léonor's face or body, thus contradicting the authenticity of the photos.

A former chief prison guard had already come to the witness box to indicate unusual behaviour from the director of the prison, Ana Maria Calado, verging on a strange relationship with Léonor. The prison governor had then allegedly suggested that he change a written report about a few red marks on Léonor's face when she returned from her interrogation with the PJ. In the same report, also gave account of Joana's mother's explanation about her bruises: according to her the red marks were indeed the result of falling down the stairs after her interrogation.

Today, at the request of the defence lawyers for the five PJ inspectors, the presiding judge agreed not to hear the witness statement of the prison director, Ana Maria Calado. According to Me António Pragal Colaço, representing four of the five inspectors, the request is based on the existence if evidence that the director of Odemira prison, Ana Maria Calado, would not be a credible and impartial witness.

A letter from a cell-mate, addressed to the authorities after the accusations made about the inspectors, reinforces this version: according to this witness, Joana's mother had admitted to her cell-mates that she had fallen down the stairs, but that, after a meeting with the prison director, she had changed her version stating having been tortured and that she was counting on pocketing compensation.

Marcos Aragão Correia, Léonor Cipriano's lawyer, now claims that the Public Minister is authorising the opening of separate proceedings against the former inspector, Gonçalo Amaral. According to the lawyer, the former coordinator of the investigation into Madeleine McCann's disappearance, would be "the main perpetrator" of the alleged assaults on his client. In statements to journalists as he left the court room, the lawyer, known for his connection to the Madeleine McCann case, indicated that the indictment was incomplete as long as Amaral was not being tried as main perpetrator and punished for the alleged acts of torture.

Five PJ inspectors are before the court in Faro, accused by the Public Minister (MP) of various crimes: Gonçalo Amaral, former coordinator of the Portimão Department of Criminal Investigation, is accused of not having denounced the alleged assaults; Leonel Lopes, Pereira Cristóvão and Marques Bonne, are accused of having tortured Léonor Cipriano in order to obtain a confession, while inspector Nunes Cardoso is accused of falsification of documents.

Marcos Aragão Correia, who had already admitted taking up the Léonor Cipriano case at the request of the Spanish detectives working for Kate and Gerry McCann - which Metodo 3 however denied - continues to particularly target Gonçalo Amaral in a trial where no one exactly understands what the role of the former coordinator into Madeleine McCann's disappearance would be.

The alleged assaults took place in 2004, but it was only in February 2008 that the court decided that Gonçalo Amaral would also be tried alongside the other four inspectors, this in spite of the fact that LéonorCipriano had always asserted that the former head of the PJ was not present at the time of the events.

Posted by AnnaEsse at 09:23 No comments: