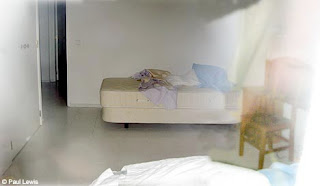 Interior of the bedroom at apartment 5A, where Madeleine and the twins slept.
Viewing the front page headlines last night on Sky News web site, several of the dailies were leading with Gerry and Kate McCann's regrets about the events of the evening in May 2007 when their daughter Madeleine disappeared. This looked like new news and there was speculation of various online forums that the timing of the expressed regrets had something to do with the imminent visit to the UK of Portuguese police officers to re-interview the seven friends the McCanns went on holiday with. Or maybe, as some suggested, it was an attempt to regain public sympathy and bring the cash rolling in for the depleted Find Madeleine fund.

The UK dailies were, in fact, quoting an article in Vanity Fair magazine about an interview Kate and Gerry gave in October 2007. It is not unusual for magazines like Vanity Fair to have such a long period between interview and publication.

The newspapers that were leading with Gerry's regrets seem to have journalists who have done very selective reading of the Vanity Fair feature.

Later in the interview, though, it seems that Gerry is not quite so regretful.

"On the couple’s return, there was further pain to contend with. More than 17,000 people had signed a petition suggesting that Leicestershire social services investigate them for leaving their three small children completely alone in the villa.

‘At the time we did it, it was not irresponsible!” Gerry snaps. It is the one subject on which he is quite defensive, arguing first one way, then conceding the opposite: “Of course we feel guilty about not having been there, and that is just something we have to deal with for the rest of our lives. You are not asking anything we don’t think about on a daily basis. We live this 24 hours a day.”

Clarence Mitchell was interviewed by Jon Gaunt of The Sun and Talksport, on Wednesday 9th January. Clarence was asked if Kate and Gerry thought it had been wrong to leave the children alone. The answer was that Kate and Gerry were sorry that they were not with her when she was taken and that they had made a mistake on the night. What mistake? Not being there? Well, all we have is that Kate and Gerry were sorry they were not there when Madeleine was taken. Strange! If Madeleine was abducted, surely this would not have happened if they had been there at that moment? And a mistake on the night? What about all the other nights when, by their own admission, Kate and Gerry left the children on their own?

The Vanity Fair article is a very long one and ploughing one's way through, it might be easy to miss at least one contradiction to reports elsewhere. Herein lies one of them; Gerry talking about what was found at the apartment when Kate returned at 10pm to check on the children.

" On one bed the twins lay sleeping. In the next lay only the plush cat toy Madeleine was never without."

The twins were lying together on one of the beds? Surely all other witness statements about the scene say that the twins were in cots?

From the Times Online, quoted on the web site, The McCann Files

"Silvia Batisa, head of administration at the complex, helped to comfort the family and interpret their interviews with the police: "The parents were devastated, in a panic. They wanted more police and dogs immediately. Kate said all the time, 'Please find my daughter’ and ‘Madeleine is beautiful'."
She recalled that the twins were still asleep in their two cots and there was the small, bright pink wool blanket that Madeleine likes to hold when she sleeps. "We walked out quickly so as not to wake up the twins. The parents immediately said, 'She’s been kidnapped'," said Batisa."

Considering that the interview was done in October, 2007, it seems strange to see that there is reference to the window of the apartment having been, "jemmied," when very early on the police and the Mark Warner management both stated that the neither the shutters nor the window had been tampered with.

There is mention of Madleine's distinctive right eye, the coloboma. This quite rare feature would make Madeleine immediately recognisable.

A good marketing ploy? Good God! You'd think he was selling double-glazing, not risking a child's life! And let's not forget how Kate and Gerry courted publicity, in an attmept they say, to keep Madeleine's profile high in the media.

"The media were constantly sought out. Reporters followed the McCanns on trips to Washington (where then U.S. attorney general Alberto Gonzales met with the couple); to Morocco—just in case Madeleine had been taken there—where they met with Charki Draiss, director-general of national security; and to Amsterdam, where the McCanns had once lived. If the networks needed fresh footage, they would be told the exact time the McCanns might be walking to church in Praia da Luz."

Kate, having said that she would not leave Portugal witout Madeleine, she and Gerry left within a couple of days of having been made arguidos. Perhaps the lease on their rented villa had run out, but it did seem like a rather hasty exit, and well covered by the media.

"It was time to go home, Gerry decided by September 9. But not alone.When Gerry and Kate were about to go home to Britain, Gerry phoned Sky News and said, ‘We’re going home on EasyJet, be on it!’ ” recalls Esther Addley, who has written incisively about the McCanns for The Guardian."

So, that was the big news, as reported by several of the UK's daily newspapers today, Gerry's regrets or lack of them! Then there was that film...and Clarence telling folks that if they wished to contribute to the fund, they could just, "..put a cheque or anything into an envelope," and address it to the McCanns, Rothley, as many people from around the world were already doing.
There you have it folks! We've had articles about blood found in the McCanns holiday apartment and in the hired car having been identified as Madeleine's and reports that the Portuguese police will be returning soon to the UK to re-interview the seven friends of Kate and Gerry with whom they went on holiday to Praia da Luz.

We've had denials about making a movie, but an admission that the McCanns want to make a film about Madeleine's disappearance. (Listen to the Clarence interview with Jon Gaunt) And now the Vanity Fair feature. Anyone else wondering if maybe there are some attempts to distract from the important news about DNA tests, police visits and the resignation of several directors of the Find Madeleine fund?

Still, as far as the McCanns and the fund are concerned, I guess there is an upside to all this. As Clarrie said, "Every time Gerry and Kate do any media, the money comes in."

Transcript of Kate and Gerry's first interview May 25th

Photographs in and around apartment 5A and forenesic officers at work

Posted by AnnaEsse at 16:21 No comments: