The McCann Case: what is being hidden from us?

11,000 pages of the case file of the, "Maddie case," have been handed over to the press. Since that day, certain members of the British press have been working away at inventing leads, which have already been followed up, trying to depict the Portuguese as incompetent in the eyes of the public for not having followed up all the leads. Is this hunt for the sensational fair or are we being prepared for something else? Something more pernicious? To properly understand our words, you need to know that the three, "arguidos," have until September 20th to ask the police to reopen the investigation. Needless to say, no parent, having been the victim of child abduction, would think of asking the police to stop their investigations! I think we can say, without fear of going wrong that.... ....would completely fall apart if they were to learn that the police were not continuing with the investigation. But it seems that in the case of the McCann parents, things are different. The parents have already stated that the Portuguese police had done all they could, implying that they were not going to ask the police to continue looking into what had happened!! That shocking decision, if it is accurate - and there is every reason to believe it is - can thus be presented to the public at the risk of shocking them and at the risk of the parents definitely losing all credibility. Also, we are witnessing a media hype of all the leads deemed not to have been followed up by the Portuguese PJ. Clarence Mitchell, is, by turns, astonished and outraged at each new false lead brought up by the press, sending off on the trail of all these false suspects, their famous, "super detectives," who waste their time on leads which they know full well lead nowhere.

The manipulation is to make the public believe that their investigators are more efficient and more reliable that the Portuguese PJ and that that is why the parents are not asking the PJ to continue their investigation but OK for their super-efficient detectives, who are, of course, super-pros, much more efficient than the police. It was said that the new detectives, hired by the parents, let the Belgian police view videos of a young girl resembling Madeleine. That is absolutely false! The McCanns' sleuths learned of the case from the press! No more! They have absolutely nothing to do with this case. All other statements are lies!

I am even going to reveal a secret that no one knows: on the day that the, "Sun," disclosed the videos on its site, the Belgian police had already been advised that the child had been found and was not Madeleine!! So, the detectives lied to their employers, who must indeed be naive. In that case, they should be sacked. It is not normal to keep spending money on detectives who lie, instead of investing in the search for Madeleine. Or else, these words have no other purpose than to pull the wool over the eyes of the public to make them believe that the new detectives are better than the police, thus preparing the public for what we dread: the parents have no intention of asking the PJ to continue searching!!!!

But for the time being, in following up leads already placed under the microscope, publishing e-fit sketches of suspects, who were mostly identified and questioned ages ago, spending so much energy manipulating the media, we have the right to say that in doing so, you are no nearer to finding Madeleine! I recall that the goal was always to find Madeleine (alive or not) not to spend money and energy on leads where the results are already in the case file. Why waste all this time on spent leads instead of searching for Madeleine, because for some time the talk has not been about finding Madeleine, but about protecting the McCanns or about silencing anyone who might speak badly of the parents!! What wasted energy in doing these things, hiring people to search out the most insignificant blog site which spoke badly of the parents....what expense, but Madeleine, what becomes of her in all this?

I can tell you one thing, which is that parents who have lived through the tragedy of an abduction don't care what a blog or site about the tragedy says!!! Only finding the child is important, whatever people think or bloggers write, no?

The truth...nothing but the truth. As we told you, we are going to open up all the details of the case file for you. The comments by the police, the interviews of witnesses and suspects, the facts, the places, the times, the dates etc. Thus, throughout these articles you will see that the so-called new leads are not new and that it's all there in the case file. To keep up and to avoid misunderstanding, bear in mind that the investigators initially followed the theory of abduction before the investigation took a different direction.

The first page of the report reveals nothing special. It is the traditional cover sheet for all police reports. The classification of the offence is found here: Abduction. The date of the events is here, 03/05/07, the file number, as well as the squad that intervened, the 4th squad. Finally, in addition to the names of the inspectors, there is a brief run-down of the facts.

Disappearance of a minor. The Praia GNR patrol were informed of the disappearance of a child, sex female, nationality English. According to GNR officers the call was made at 22.40 and the little girl disappeared from a ground floor apartment at the Ocean Club where a family with children was staying. The layout of the apartment comprises two bedrooms, a kitchen, a lounge and a bathroom. The apartment has easy public access. During dinner, the couple visited the children's bedroom several times. During one of these visits, the mother noticed that her daughter wasn't there and raised the alarm in order to find her. Faced with these facts and by higher decision, the PJ's duty team was advised, and they immediately started on various avenues of research.

This is the start of the police report itself. The PJ will identify the parents and give a brief outline of the evening's course of events.

The first part of the document clearly identifies the parents, giving their full names, their dates of birth, their passport numbers, their telephone numbers, as well as their exact address. You will understand that these records cannot be published. No one needs to know the parents' telephone number.

The report continues: The missing minor is identified as Madeleine Beth McCann, born 12/05/2003. In addition to the missing minor, the couple have two other children, twins aged two years. The two children were also in the bedroom where the missing minor, Madeleine, was sleeping. In our conversation with Mr Gerald Patrick McCann, it was possible to establish that: The family had been at the Ocean Club since April 28th 2007 for a week. From 29/04/2007, they began to dine ( he and his wife) at an Ocean Club restaurant while their children remained a few metres from the restaurant, in their bedroom. They had the habit of dining in the said restaurant with friends, three couples. On the date of the events, they got up at 07h30 in the morning and had breakfast in the apartment.

09.00: They left the apartment and left their children at the Ocean Cub crèche where the Ocean Club staff looked after the children until 12.30.

After lunch, towards 14.40, they again placed the children in the said crèche, where they stayed until around 17.00.

Towards 17.30, the parents bathed the children, gave them something to eat and towards 19.30 the three children were put to bed in the same bedroom of the apartment.

At 20.30 the couple headed for the restaurant.

Towards 21.05/21.15 GERALD (the father) went to see the children in their bedroom. He saw the door half-open. He found that strange. He had the idea that he had closed it properly. Nevertheless, he went in and he saw the three children. The shutters were closed.

At 21.20, JANE, a friend, passed close to the apartment, at the side of the building and saw a person with a child in his arms going down the main road. However, she did not recognise this person, or the child. She could only say that the man must have been between 30 and 40 years old and that he had dark hair and light-coloured trousers.

At 21.30, a friend, MAT, only went to the rear of the apartment towards the lounge window. He didn't go in and only saw the twins asleep. He did not notice anything strange.

At 22.00, KATE, the mother, was confronted with the disappearance of MADELEINE BETH MCCANN. She noticed that the window, as well as the shutters, was wide open.

Then, the report, via the Ocean Club's director, identifies the employees on duty. The report also states that the police have a copy of the register of comings and goings of children at the crèche on 03/05/07. The report states that:

It is advisable to report that before the arrival of the police patrol, various people were already in the apartment. People who could have contaminated that space. It is also to be noted that the GNR officers carried out various searches around the apartment in order to locate any missing person. However, these searches were fruitless. A photographic report was done. The parents gave a photo of the minor: MADELEINE BETH MCCANN.

End of part one. The photo of Madeleine given by the parents is intended to show the little girl and to allow clear identification. The photo used is shown below. 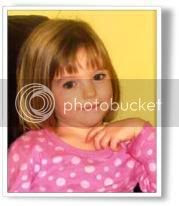 Blogger's note: this seems like an odd photo of Madeleine for the McCanns to give the police on the evening of her disappearance. The child in this photo looks nothing like the one in the, "last photo," which was produced for the police 23 days later, the one of Madeleine with Gerry and Amelie by the swimming pool. I seriously doubt that Madeleine could have been identified from that photo.