Extracts from AFP article on the women of Swat under Sharia law.

Nearly 100 years after the annual day was created to mark the struggle for equal rights for half the world's population, most women in Swat look blank and go silent when asked about gender rights and discrimination.

Last month, the Pakistan government signed a widely criticised agreement with a pro-Taliban cleric to enforce sharia law in exchange for a ceasefire in a region where most locals say the Taliban have become the masters.

Militants have destroyed 191 schools in the valley, 122 of them for girls, leaving 62,000 pupils with nowhere to study, local officials say.

Huma Batool -- not her real name -- is a 42-year-old mother of two who dices with death to teach girls at a private school in the region's main town Mingora.

"We have to veil ourselves and wear shuttlecock burqas. We are not safe even at home. We fear the Taliban all the time. Life is becoming worse and worse for women in Swat," she told AFP by telephone.

Educated and financially self-sufficient, she cannot even pop to the shops without a male relative, leaving her frequently couped up at home for hours, waiting for a suitable escort to become available.

"You cannot imagine how I manage to get to school, practically every day I think about leaving the job and sitting at home."

I will try not to whinge when I have to scrape frost off my car and the heavy morning traffic means that I take 45 minutes to drive 20 miles to the school I work at. This woman, who bravely runs a school for girls has to wait for a male relative to escort her before she leaves her home.

From Atlas Shrugs the brilliantly informative blog by Pamela Geller, I am picking out just a few of Pamela's posts in support of women.

In the UK, a gym class at a private school for girls has been forced to close because Muslim parents have complained about there being boy members. Now, I know that boys can be a real nuisance. Research is said to show that boys demand more attention, but there were only 35 boys included in the 250 members. It seems to me that those Muslim parents should be looking closer to home when thinking about boys in that class.

In my experience as a teacher with over 30 years experience, the boys who are, generally, the biggest pain in the bum are the Muslim boys. In Muslim households, boys tend to be treated much better than their sisters, who are often expected to wait on them like servants. I once came across a five year-old Muslim boy, lying on a couch, with a baby's bottle in his mouth, while his younger sister fetched his shoes for him. He lay there like a fat maggot, sucking baby formula from a bottle that almost disappeared into his fat chops. Yuk! Muslim parents, teach your boys to respect girls and women and then you might see that there really is no harm in a few boys doing gymnastics together with girls. 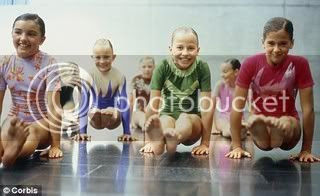 Colin Perry, who runs the Shirley Gymnastics Club, said he was saddened by the decision which he said compromised the school's commitment to multiculturalism because of fears of offending a minority.

He is now desperately searching for a new home for the club's 250 members - including 36 boys - which had held mixed-sex classes at the junior school site of Old Palace School, in Croydon, South London, since January last year.

A young woman living in Canada, who was killed by her father, aided by her own brother, because she wanted to live a life of freedom, like the rest of her classmates. She was buried in a grave marked only by a number and Atlas Shrugs has steadfastly campaigned for a headstone to mark the life of this young woman.

In spite of opposition from Aqsa's family, who seem more concerned about their so-called "honour," in Islamic terms than that Aqsa's own father murdered her, there will be a memorial for Aqsa.

Hallelujah! Deepest thanks and gratitude to Atlas reader and Fire Chief, Town of Pelham, Scott McLeod, a wonderful man who contacted one of his Municipal Councilors regarding an Aqsa memorial. Councilor Sharon Cook presented a motion to offer an area in the Pelham Peace Park for a suitable Memorial. Sharon Cook, you are a righteous woman!

".....on Monday, this week the council of the Town of Pelham passed a resolution to install a memorial to Aqsa Parvez in Peace Park in Fonthill (Smaller community within the Town) We expect to be ready some time later in the year and it likely will be placed in one of the areas where people rest during the day. As indicated before, I will send photo's of the general area where we propose to locate the memorial. I have requested the Clerk of the Town create a copy of the resolution and approval in PDF, which I will then forward to you."

Over the fall of 2007, Aqsa Parvez shuttled between friends’ houses and youth shelters. She was afraid to go home. Her father, Muhammad, was enraged because she refused to obey his rules. He swore he would kill her.

On the morning of December 10, Aqsa huddled in a Missis­sauga bus shelter with another Grade 11 student, a girl she had been staying with for the past couple of days. They had plenty of time to make it to their first class at Apple­wood Heights Secondary School. As they waited, Aqsa’s 26-year-old brother Waqas, a tow-truck driver, showed up at the bus stop. He said that she should come home and get a fresh change of clothes if she was going to be staying elsewhere. Aqsa hesitated, then got into his car.

Less than an hour later, Muhammad Parvez phoned 911 and told the dispatcher that he had killed his daughter. Within minutes, police and paramedics arrived at 5363 Longhorn Trail, a winding suburban street near Eglinton and Hurontario, and found Aqsa unconscious in her bedroom. The 16-year-old wasn’t breathing. The para­medics started CPR, found a faint pulse, and rushed her to Credit Valley Hospital, 10 minutes west. A few hours later, she was transferred to SickKids and put on life support. She died just after 10 that evening. The official cause was “neck compression”—strangulation. (more here)

Atlas also highlights the story of Ameneh Bahrami, who was blinded in an acid attack by a spurned suitor.

"Madrid, Spain (CNN)- An Iranian woman living in Spain is welcoming a Tehran court ruling that awards her eye-for-an-eye justice against a suitor who blinded her.

In a Spanish radio interview, she says her aim isn't revenge -- it's to make sure her suffering isn't repeated.

Ameneh Bahrami was blinded and disfigured in 2004 when a man she had spurned threw acid on her. Late last year, an Iranian court reportedly ruled that Islamic justice calls for the attacker to be blinded with acid, too.

But the victim says she is entitled to blind Majid Movahedi in only one eye, because under Iranian law "each man is worth two women."

She also says he would be blinded by having several drops of acid put into one eye, whereas she had acid splashed all over her face and other parts of her body.

She says she's waiting for a letter from the court telling her to go back to Iran for the punishment to be carried out.

Bahrami tells CNN she first crossed paths with her attacker Movahedi in 2002, when they attended the same university. She was a 24-year-old electronics student. He was 19. She never noticed him until they shared a class. He sat next to her one day and brushed up against her. Bahrami says she knew it wasn't an accident.

"I moved away from him," she said, "but he brushed up against me again." When Bahrami stood up in class and screamed for him to stop, Movahedi just looked at her in stunned silence. Bahrami said that over the next two years, Movahedi kept harassing her and making threats, even as he asked her to marry him.

Then one day she was leaving work and he snuck up behind her. When she turned around he threw acid on her face."