Madeleine McCann: Kate and Gerry McCann do not want the case to be reopened. 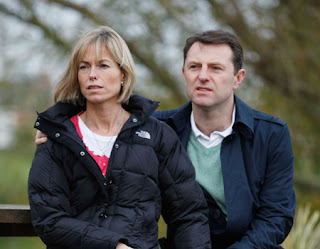 At the beginning of November this year Kate and Gerry McCann launched a petition calling for a review of all the evidence in the case of their daughter's disappearance. They went for a walk in the park and settled down to tell the massed media how delighted they were with the response.
(Daily Mirror 7/11/2010)

Later in the month, the McCanns were in Portugal to speak to their solicitor, Isabelle Duarte and were interviewed for a Portuguese TV channel. (Watch the video on The McCann Files, with full transcript by Nigel Moore)

In this statement, Kate McCann sounds as though she would like the case to be reopened.

Reporter (v.o.): Kate and Gerry McCann say that the process in Portugal was shelved under pressure because it had reached the end of the time to investigate and that, since that time, new data has appeared which has not being analysed.

Does Gerry want the case to be reopened?

Gerry McCann: As far as we know, since then, no-ones looking at the... the data fresh and that's really important. We realise that it's not a usual process in Portugal - we realise that - but it doesn't mean to say that it... it... it cannot be done or shouldn't be done.

Reporter (v.o.): Although they admit that there is not any new evidence that allows the process to be reopened.

Gerry McCann: We don't have key evidence to say 'You must investigate this because it will open... you know, it reopens the file' and that's why we're asking for a review. We want to identify areas that merit further investigation, that may lead to new evidence that could help us solve the crime.

Now, if I can translate that into English, Gerry McCann seems to be saying that they don't have any new evidence that would lead to the reopening of the case, but the review might lead to new evidence that could, "help us solve the crime." Us? Who's that? Not the Portuguese police and the McCanns because, as Gerry says, "no-one is looking at the data fresh." So, 'us,' is likely to be the McCanns and their private investigators, Edgar and Cowley. Personally, I think they just want to get their hands on the information that's in the Portuguese police files that are still covered by the secrecy of justice rules. They've got that libel case coming up against Gonçalo Amaral and that info could be really handy!

Anyway, so there they were, taking a walk in the park, accompanied by the massed media, telling the world (but probably not his dog!) that they wanted a review of the case, which, according to Kate McCann was a "vital step really before reopening."

Then, totally out of left-field comes Wikileaks and the story that the Madeleine McCann case is mentioned in cables between US ambassador to Portugal, Al Hoffman, and his British counterpart, ambassador Alexander Wykeham Ellis.

On Monday December 13th, The Guardian reported that:

British police helped to "develop evidence" against Madeleine McCann's parents as they were investigated by Portuguese police as formal suspects in the disappearance of their daughter, the US ambassador to Portugal was told by his British counterpart in September 2007.

The meeting between US ambassador Al Hoffman and the British ambassador, Alexander Wykeham Ellis, took place a fortnight after Kate and Gerry McCann were formally declared arguidos, or suspects, by Portuguese police. The McCanns have said that there was "absolutely no evidence to implicate them in Madeleine's disappearance whatsoever."

In a diplomatic cable marked confidential, the US ambassador reported: "Without delving into the details of the case, Ellis admitted that the British police had developed the current evidence against the McCann parents, and he stressed that authorities from both countries were working co-operatively."

.
Well, of course the McCanns' PR rep had something to say about it!

Responding to the contents of the cable, a spokesman for the McCanns told the Guardian: "This is an entirely historic note that is more than three years old. Subsequently, Kate and Gerry had their arguido status lifted, with the Portuguese authorities making it perfectly clear that there was absolutely no evidence to implicate them in Madeleine's disappearance whatsoever.

"To this day, they continue to work tirelessly on the search for their daughter, co-operating when appropriate with both the Portuguese and British authorities."

So, it's an "historic note that is more than three years old."? I guess Jane Tanner's original statements about the abductor could be said to be 'historic,' too, because not only are they nearly four years old, they have subsequently been changed so much by Jane that there is now no evidence whatsoever to implicate that man she described!

As for there being no evidence to implicate the McCanns in Madeleine's disappearance, I believe the accurate report would be that there was insufficient evidence to charge anyone, which is somewhat different.

The McCanns' PR frontman also tells us that up to this very day the McCanns have been "co-operating when appropriate with both the Portuguese and British authorities."

So, they decide when it's appropriate to co-operate? If they decide it's not appropriate they don't? Like maybe Kate McCann's refusal to answer those 48 questions and in spite of promises to return to assist when they took flight from Portugal, a disinclination to return and take part in a reconstruction of the events surrounding their daughter's disappearance?

And now, in a formal statement the McCanns' Portuguese lawyer, Rogério Alves, "opposes the reopening of the process." (Joana Morais)

Rogério Alves, the McCann couple’s lawyer, has told TSF that there is no new data in the documents that were revealed by Wikileaks that would justify the reopening of the process.

The McCann couple’s lawyer in Portugal, Rogério Alves, has said in a statement to TSF that he opposes the reopening of the inquiry into the disappearance of Madeleine in Lagos, in the Algarve, in 2007.

I don't know that anyone has asked for the process to be reopened based on the information in the leaked cables, so this appears to be a preemptive just-in-case! Just in case, you're thinking about it, don't! You'd think that parents of a missing child would clutch at any opportunity for the investigation into their daughter's disappearance to be reopened, but not them and not now! But the McCanns consider that a review of the evidence would be a step towards reopening the case? Well, no, I don't think so, since Gerry thinks it would help "us to solve the crime." Some bunch of "us," will solve the crime without reopening the case? Very odd!

“That information is completely useless. It only contains a reference to a piece of evidence that the Public Ministry and the Polícia Judiciária (PJ) considered to be totally useless, which consisted of a couple of dogs that having barked, but being naturally unable to depose in a court room, would constitute some sort of indication against the child’s parents”, he said.

“To open the process, yes, when that contributes to finding out where the child is and what happened to her, [but] to open the process, no, when it is to review what was already seen by the PJ and by the Public Ministry, that correctly considered those indications to be absurd and inconsistent”, Rogério Alves added, justifying that “nobody in a democratic state can be taken to court based on dogs’ barking. That is absurd.”

The McCanns may have gone for a walk in the park, but trying to figure out what they do or don't want to happen is definitely not a walk in the park for the rest of us! Still, I tend to think there must be a reason why, apropos of nothing that I know of, the McCanns' Portuguese lawyer is opposing the reopening of the process.