This is the video that was removed from YouTube. It is simply Tony Bennett of The Madeleine Foundation reading aloud the 48 questions that Kate McCann refused to answer in September 2007 when she was questioned under the status of arguida by the Portuguese police.
Posted by AnnaEsse at 14:41 11 comments:

Your Questions Answered About Gonçalo Amaral 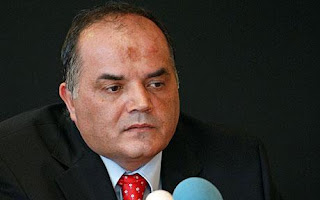 In this leaflet, we try to answer your questions about Mr Gonçalo Amaral, the Portuguese detective who led the investigation into the reported disappearance of Madeleine McCann on Thursday, 3 May 2007. Four months later, Mr Amaral stunned the world by pulling in the McCanns for questioning as suspects in the disappearance of their daughter. Three days later, an interim report from Chief Inspector Tavares de Almeida, the senior investigating officer in the case, gave reasons for the police’s belief that Madeleine had died in her parents’ apartment.

Less than a month later, Mr Amaral was removed from the investigation (not ‘sacked’ as the media claimed). The British media have, since then, criticised his investigation, often referring to him as ‘disgraced’. He was accused of beating a Portuguese woman, Leonor Cipriano, into falsely confessing to murdering her daughter. He retired from the police to write a book, A Verdade da Mentira, ‘The Truth About A Lie’. In it, he explains why he and his team had good grounds for believing Madeleine had died in her parents’ apartment and covered up her death. A year after his book came out, the McCanns brought a libel action in the Lisbon High Court claiming, as damages, the £1 million profits he and his publishers had made from the book’s sale in 9 European countries. The case will be concluded later this year. We felt it was time the British public knew the facts about Mr Amaral. Here we answer some frequent questions people have about him:

1. What career did Mr Amaral have before he led the Madeleine enquiry?

ANSWER: Mr Amaral was an experienced, respected, senior detective. One of his colleagues described him as ‘incorruptible’. He had many successes in bringing drug dealers to justice and in one year netted the biggest haul of illegal drugs of any detective in Portugal. His most famous case was his success in bringing the killers of 8-year-old Joana Cipriano to court and ensuring that they served long jail sentences for their appalling crimes.

ANSWER: Yes he was. And most unjustly. Joana was reported missing by her mother, only after she had apparently been missing for two days. The sad truth was that Joana had come back from the village shops to find her mother in bed with her uncle. After an intensive investigation led by Mr Amaral, both voluntarily confessed to having brutally murdered her and disposed of her body. Today they are serving 16-year-jail terms for her murder.

3. What about the photos of her in the press showing her with black eyes?

ANSWER: Since being convicted of their crimes, both the mother and the uncle have tried to claim they were beaten by Mr Amaral and his men and forced to confess to something they had not done. However, it is clear that Leonor Cipriano suffered her injuries as a result of a beating by fellow female prisoners after being taken to Odemira Prison. During a recent court case, the Director of Odemira Prison was forced to admit to asking her Prison Medical Director to lie about the cause of Ms Cipriano’s injuries. Ms Cipriano changed her story many times.

4. Why was Mr Amaral removed from the Madeleine investigation?

ANSWER: Shortly before he was removed, he made some ‘off the record’ comments to a Portuguese journalist detailing how the British government was interfering with his investigation. A leading Portuguese newspaper published his remarks, giving the Portuguese authorities an excuse to remove him from the enquiry. As Mr Amaral has set out in a second book, ‘The English Gag’, Prime Minister Gordon Brown was told of his being removed from his post before he was. Mr Amaral has provided evidence of British government interference in his enquiries in his two books on the case. As we have shown elsewhere, the British government heavily influenced this investigation from the outset, sending several top-level people out to Portugal in the first week alone, including staff from MI5. We aim to cover this topic in more detail on our website in the coming months.

5. Wasn’t his enquiry incompetent, as the British news media suggest?

ANSWER: No. As was clear from the interim police report of 10 September 2007, the investigation was severely hampered by overwhelming international media coverage, requiring the police to follow up literally hundreds of false ‘sightings’ of Madeleine. Despite that, the police conducted a meticulous investigation with the help of hundreds of police officers. The interim report was very thorough. We have reproduced the whole of it in our recent book on the case: ‘The Madeleine McCann case Files: Volume 1’, available for purchase from our website.

6. But isn’t it true that the police failed to secure the crime scene properly?

ANSWER: This is one of many false stories about the Madeleine McCann investigation put about in the British media. What most people do not know is that despite the McCanns and their friends apparently genuinely believing that an abductor had taken Madeleine from her room, they themselves tramped all over the McCanns’ apartment and allowed several others to do so before the police arrived. This contaminated the crime scene, making the Portuguese police’s task much more difficult. In fact, the police sealed the crime scene later that night as soon as they were reasonably able to. The McCanns also criticised Mr Amaral, amongst other things, for never meeting them and never visiting the crime scene. But then the head of any major criminal investigation must be a good delegator. Mr Amaral’s enquiry was also hampered by many inconsistencies in the accounts given by he McCanns and their friends and by the McCanns’ refusal to disclose certain information such as their telephone, credit card and medical records.

7. Is it true that Mr Amaral and his publishers have made £1 million from the sale of Mr Amaral’s book?

ANSWER: Yes. We must remember that in trying to bring us the truth about what really happened to Madeleine Mr Amaral gave up his job many years ahead of his normal retirement date, thus losing huge amounts of both salary and pension entitlement. The McCanns threatened to sue Mr Amaral and his publishers for libel when his book. ‘The Truth About A Lie’, was first published in July 2008. But they did nothing about it until over a year later, by which time his book had sold over half a million copies across Europe. The McCanns have never explained why they waited for over a year to take action, but they are now claiming the £1 million profits the book has made. As a result of the McCanns’ libel action, Mr Amaral’s book has been banned from sale in Portugal since September 2009.

8. Was Mr Amaral convicted of filing a false report in the Cipriano case?

ANSWER: Yes. However, he has appealed, and under Portuguese law his sentence, a suspended prison term of 18 months, cannot take effect until his appeal is heard. He was found not guilty of any suggestion of being involved in the alleged beating of Leonor Cipriano and her brother. On the basis of precious little evidence, he was found guilty of ‘filing a false report’ about the case. There are many indications that Mr Amaral’s trial was politically motivated. In this connection we would commend our article on the prosecutor in this case, Mr Marcos Correia. We have a lengthy investigative article about him on our website.

9. What kind of help and support does Mr Amaral need?

ANSWER: His most urgent need is for financial help towards the huge costs of his legal expenses for defending the McCanns’ libel action and the various unjust criminal charges bring levelled against him. It is very easy to support him; his representative Mr Paulo Sargento has created a website to give practical help to him. You can donate by PayPal. Here is the link: http://pjga.blogspot.com/

Posted by AnnaEsse at 09:04 No comments: