Madeleine McCann: “One and one has to make two. Until the answer is found he will not give up.” 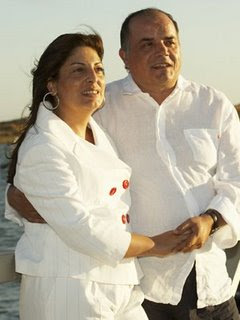 Sofia Leal, wife of Gonçalo Amaral, the Portuguese police officer who led the investigation into Madeleine McCann's disappearance, was interviewed by the Sunday Express

“Goncalo loves me and our three girls very much but he lives for his job. For him an investigation is like a mathematical equation.

“One and one has to make two. Until the answer is found he will not give up.” From the proceeds of the book her husband has bought a Jaguar car but she insists he has not made a lot of money and that he will defend the legal action.

In my world, too, one and one has to make two. It usually does. It doesn't make 11 and it's not usually binary and make 10. It makes 2. In other words, the evidence has to make sense. It has to form a coherent whole so that the pieces of the puzzle fall into place and the truth comes to light.

When I spoke to my daughter on the phone this morning, she told me that her little boy was in the guest bedroom with his father, playing with his "baby," toys that have been stored there, getting out and joyfully piecing together the puzzles he had fun with. Now, it's a reasonable assumption that the pieces of J's puzzles are exactly the same now as they were a year ago and that they fit together, just as they did then, and they make the same picture. I also assume that no one has changed the pieces for others that don't fit, added extra pieces of changed the picture.

Madeleine McCann, "..is in a secret lair," David Edgar is quoted as believing, by The Independent

"He still feels Maddie was snatched by a man spotted by the McCanns’ friend Jane Tanner, one of the so-called ‘Tapas Seven’ who dined with them the night Maddie went missing.

Dave said: “Jane is a very reliable witness and there were other sightings of this man, who Jane saw carrying a little girl in a blanket, in the days leading up to the disappearance.”

He feels this is the lone prowler who has Maddie stashed in a cellar or dungeon in the lawless villages around Praia da Luz."

Donal MacIntyre has a reputation, at least according to the Sunday Express for being, "fearless and courageous." Apparently, he takes on, "dangerous stories." !!

Also in the Sunday Express on the same date as the above, (September 20th 2009) Donal MacIntyre fearlessly expounds his theory about how Madeleine McCann was abducted. "I know how she was taken," he says.

"MADELEINE McCann was abducted by at least two kidnappers who must have carried out several dry runs in the days leading up to her disappearance.

After spending a week on the ground investigating the case and the methods used by the kidnappers, I can only conclude that they must have entered the apartment to carry out a rehearsal, because they were working to an incred­ibly tight schedule.

The three-minute time frame they allowed themselves left no margin for error."

So, returning to the puzzle analogy, if you can't make the pieces fit the puzzle, change their shape and/or hammer them into place! It has been shown that it would have been close to impossible for an abductor to have climbed through Madeleine's bedroom window, carrying a child. So, there must have been at least two abductors! And the very tight window of opportunity? Well, they must have been watching and must have been in the apartment before, carrying out a rehearsal.

Now, that's not fearless, Donal, if you have absolutely no fear of being ridiculed by real journalists. And it's not exactly courageous either, making up details to fit what you want to believe are facts.

LOW COPY NUMBER (DNA ANALYSIS) IS NOT USEFUL IN THIS CASE....

After the release of the police files on the Madeleine McCann investigation, the Liverpool Echo ran an article on the subject of the LCN analyses of samples lifted from the McCanns' holiday apartment and their car which they hired some time after Madeleine's disappearance.

"Mr Lowe, from the major incidents team at the Birmingham-based Forensic Science Service (FSS), said it was impossible to conclude whether a sample from the McCanns’ hire car came from their daughter Madeleine."

Eddie (Enhanced Victim Recovery Dog) and Keela (Crime Scene Investigation dog) both alerted independently on the same spots in the apartment and in the vehicle and the first report from Forensic Science Services appeared to conclude that with 15 out of 19 genetic markers coinciding with Madeleine's DNA profile, there was a good chance of the samples being from Madeleine's body. Somehow, though, a follow-up report came to a different conclusion: it wasn't possible to conclude that the sample in the hire car came from Madeleine.

So, with the above, we have two specialist dogs alerting to the odours they have been specifically trained to find and from the places indicated by the dogs, there are samples: microscopic, but samples that are at least recognised as bodily fluids.

Well, slap my thigh, knock me down and call me Jeffrey! Dave Edgar, the ex-cop, turned private detective hired by the McCanns, thinks that LCN DNA analysis could, "help find the kidnapper."

Seems like Sunday September 20th was a busy day for the Maddie case in the news. In The Belfast Telegraph

"He claimed if Low Copy Number (LCN) DNA testing had been carried out at the Ocean Club resort in Praia da Luz, where Maddie vanished from two years and four months ago, it is “highly likely” her abductor would have been nailed."

Right Dave! And what samples would they have used for this testing? There were no fingerprints, or glove prints, no fibres, no hairs, no foot prints: basically no evidence left behind by the alleged abductor. So, what would they have tested? Where would they have lifted the samples from?

Dave, LCN testing was used in the apartment, on the only places where both specialist dogs alerted.

"Dave said: “It’s an amazingly powerful tool, so it’s a real shame we will never get to use it with Maddie.”

Dave, where have you been all this time? Didn't Clarence or the McCanns tell you that this, "amazingly powerful tool," had been used with Maddie? It was used, Dave, and in situations where there was a good chance that it would provide meaningful results. While DNA can be extracted from sweat left with fingerprints and on surfaces the perp has touched, the only fingerprints found on Madeleine's bedroom window were Kate McCann's.

But hang on a minute, Dave, you didnt' say that the tests should have been carried out in the apartment, or at least, not in what you are quoted as saying: you said, "..at the Ocean Club resort in Praia da Luz." So, whereabouts at the Ocean Club? Everywhere? All over the whole spread-out area that constitutes the resort? Just in places where the McCanns, their children and their friends might have been?

Dave, go talk to the McCanns and Clarence about LCN in Maddie's case, because they may not be too pleased about your referring to this, "powerful tool," that could help find the kidnapper. Didn't you know, Dave, they found a few cases where LCN evidence was thrown out by a judge, as proof of its lack of reliability. So, maybe they're not too keen on its use.

"But the former RUC detective sergeant’s team will never be able to use it as Portuguese authorities will not give him access to forensic information."

Now, Dave, when you were a real police officer, rather than a pretendy one, advising those you identified as suspects that they should be interviewed by you in order to clear their name (Hewlett?) would you have handed over forensic information to a private detective? Somehow I doubt it, or at least I do hope that real police officers would not do this.