Isabel Duarte: Madeleine's life could be at risk 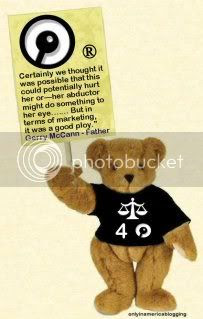 Image by Himself of The McCann Gallery
Kate and Gerry McCann have been to Lisbon this week to consult their Portuguese lawyer, Isabel Duarte about the 2,000 page dossier of evidence in their daughter's disappearance, which has been released to the press. They were interviewed by Sandra Felgueiras.


Asked about the files, which contain apparently new sightings, Gerry says, "We've now got them, but as I say errr Kate and I haven't actually gone through them ourselves."

Why not? I'd be tearing those files apart looking for any image that might look like my child.

Kate McCann, asked about sightings, says, "To be honest, we don't get shown a lot of the photographs anyway. I think the police decided that there was so many photographs like that get sent to them and, you know, clips of CCTV that it's...."

I find it hard to trust people who insist on saying, "To be honest." Honest people don't need to keep saying that in my opinion.

Maybe that's partly the reason why the McCanns have not been shown the images in the dossier they now have access to. Or it could be that the sightings were checked out before being labeled "irrelevant," or even because the case is officially archived, awaiting new information. If the McCanns consider that the images of sightings since the case was archived constitute new information, they could ask the Public Prosecutor to reopen the case.

It could, of course, be that most of the sightings are as ridiculous as that of the half-naked Frenchman on a French motorway, waving a gun at a small child and no one appeared to have called in the armed response unit. Or there may be more like the people from Tayside in Scotland, who encountered a Maddie look-a-like at a camp site in France, who pleaded "help me," with her eyes, but they didn't try to help her until they got home and contacted the local police.

"The McCanns' visit to Portugal came after an Algarve court released new files on their daughter's disappearance.

The 2,000 page dossier covers dozens of possible sightings Portuguese detectives appear to have failed to follow up.

The couple, both 41, criticised the disclosure, claiming it jeopardised the search for Maddie."

It seems that there have been numerous images of Maddie look-a-likes over the past two years and 10 months. Amongst them was the little Moroccan girl, snapped by an enthusiastic holiday-maker, being carried on her mother's back. Her photo went round the world. Did the McCanns think this jeapardised the search? Not so as you'd notice. Did they make a fuss about the child and her family being hounded by the world's press? If they had, I'm sure we'd have heard about it.

"Appealing for media organisations with access to the files not to publish further information on possible sightings, Gerry said: "If it was divulged it could be very bad for our private investigators."
The Sun

It could be quite bad too for any child whose privacy was invaded. But very bad for the McCanns' investigators? What? It would make them look like absolute pr@ts? The world and its dog would know that the private detectives were intent on searching out half-naked Frenchmen and visiting a camp site where a child was seen rather a long time ago, which, of course, would be while they were on their way, finally, to those "lawless villages," near Praia da Luz to carry out a massive surveillance operation on the "hellish lairs," there. Heroic stuff!

"Isabel Duarte, the McCanns' Portuguese lawyer, insisted: "Innocent lives including Madeleine's life itself could be at risk."
The Sun

Innocent lives could be at risk? Whose? Which of the named people reporting sightings have been placed at risk? None that I know of.

And those innocent lives include "Madeleine's life itself."

Let's consider who put Madeleine's life at risk. Did any of those people on any of the five continents who have reported sightings have anything to do with Maddie's being left alone on five consecutive nights in an unlocked apartment while her parents ate their tapas and downed a few bottles of wine?

In spite of being advised otherwise by the Portuguese police, the McCanns made a very significant feature of Maddie's eye defect in most of their publicity.

So, there was Gerry acknowledging that he was willing to risk harm to his child for the sake of a "good marketing ploy."

The extent of the media circus that surrounded Maddie's disappearance, most of it incited by the McCanns themselves, was also thought by the police to have placed Maddie at risk.

"It is Gerry who is behind what he tells me is “the marketing … a high public awareness” of Madeleine. At his side while we talk is Clarence Mitchell, a voluble former government media analyst and BBC reporter, handpicked by Gerry to be the latest in a line of spokesmen. On October 17, Mitchell spoke at Coventry University. His topic: “Missing Madeleine McCann: The Perfect PR Campaign.” Except that it has been anything but perfect.

It has in fact been so counterproductive that, as winter approached, Portuguese attorney general Fernando Pinto Monteiro suggested that one way or another the McCanns were responsible for their child’s death. Specifically he said that if indeed Madeleine had been kidnapped, it was the carefully contrived publicity engineered by her parents that likely sealed her fate. “With the whole world having Madeleine’s photo,” he observed, any abductor would have been pushed to such a degree that “there’s a greater probability of the little girl being dead than alive.” Vanity Fair

Then, of course, there were the 48 questions that Kate McCann refused to answer and one that she did.

The one that she did answer?

Q. Are you aware that in not answering the questions you are jeopardising the investigation, which seeks to discover what happened to your daughter?

A. 'Yes, if that’s what the investigation thinks.'

So, who placed Madeleine McCann's life at risk? The newspapers who were courted by the McCanns and who are now being harangued for publishing details of these ludicrous sightings or the parents who left her alone with two-year-old twin siblings in an unlocked apartment? The parents who created a huge publicity machine, which would have sealed her fate if she had been kidnapped? The parents whose PR spokesman created "The Perfect PR Campaign," around their daughter? Maddie's father who thought that putting her at risk was worth it for a "good marketing ploy."? Maddie's mother, who acknowledged that not answering police questions would jeopardise the investigation?

Kate and Gerry McCann, why not at least have a look at those files before you decide that they are putting anyone at risk? And why not just accept responsibility as the only people who really put your daughter's life at risk? It wasn't the Portuguese police or the British police, or the Home Office, or Gordon Brown or Gonçalo Amaral or the newspapers. Time to stop the blame game and your sue-a-lot fundraising and accept who is responsible for "the situation Madeleine finds herself in." It ain't any of those folks.