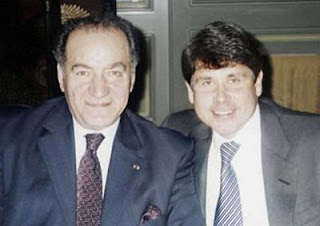 Kirk again harped on a nearly $23 million loan recently reported by the Chicago Sun-Times that went to a development company with ties to convicted Illinois political insider Tony Rezko and Nadhmi Auchi, an Iraqi-born billionaire who was embroiled in a fraud scandal of his own.

Auchi was convicted of receiving illegal commissions as part of France's giant Elf-Aquitaine oil scandal that sent top executives to jail. In 2003, Auchi got a suspended sentence and was fined. He has denied any role in the scandal.

Now, here is the Carter-Ruck letter:

Carter-Ruck is acting on behalf of a man who was convicted of fraud in 2003 by a French court.

A controversial Iraqi-British billionaire who funds one of the UK's most strongly anti-Zionist websites organised a banquet in honour of Lib Dem leader Nick Clegg, and a fundraiser for Susan Kramer, the party's candidate in the high-profile seat of Richmond Park.

Nadhmi Auchi, 73, was convicted of fraud in the giant French Elf-Aquitaine oil company trial in 2003 and given a suspended sentence, although he is seeking to appeal the verdict.

And what about Mr Auchi's former business associates?

On a spring day in 2004, Nadhmi Auchi, one of the world's richest men, flew in to Midway Airport on a private jet. Met by a welcoming party that included Lt. Gov. Pat Quinn (there at the request of the Blagojevich administration) and businessman Tony Rezko, Auchi was brought to a downtown hotel where he was the guest of honor at a reception hosted by Blagojevich.

The Iraqi-born billionaire -- who lives in London -- had come to Chicago on business. He would go on to invest nearly $170 million in a prime piece of vacant land in the South Loop -- 62 acres along the Chicago River that Rezko wanted to develop.

Now, Auchi is surfacing in Rezko's corruption case, set to go to trial Monday. Auchi is mentioned by prosecutors in the court filing that got Rezko's bail revoked and landed him in jail.

Rezko was indicted in October 2006 in a scheme to shake down firms seeking state pension business to enrich himself and Blagojevich's campaign fund. He got $3.5 million from Auchi's company in April 2007 but never told a judge about it, raising concerns that Rezko, a native of Syria, might flee the country.

Auchi wasn't accused of wrongdoing regarding Rezko. But he had faced legal troubles in Europe, prosecutors noted, having been "convicted several years ago in France on fraud charges" and sentenced to 15 months in prison, "but the sentence was suspended as long as Auchi committed no new crimes."

They raised the possibility that, even though Auchi's Luxembourg-based General Mediterranean Holding has taken control of the valuable South Loop property from Rezko, Auchi might be barred from entering the United States. "In November 2005, after Auchi was unable to enter the United States, Rezko directly appealed to the State Department to permit Auchi to enter the United States and, it appears, asked certain Illinois government officials to do the same," prosecutors wrote.

So how was Auchi not allowed in the United States in November 2005 but able to come here in 2004 -- despite his criminal conviction in France in 2003?

So, now I turn to the controversial Wikileaks site for their:

It's a very long entry on the Wikileaks site. So, I shall just copy significant parts of it and ask you to read the article in its entirety on the web site. This article seems to totally debunk Carter-Ruck's claim that Nadhmi Auchi was not associated in any way with Sadam Hussein.

“A British-Iraqi billionaire lent millions of dollars to Barack Obama's fundraiser (dual US-Syrian citizen Tony Rezko) just weeks before an imprudent land deal that has returned to haunt the presidential contender, an investigation by The Times discloses. The money transfer raises the question of whether funds from Nadhmi Auchi, one of Britain’s wealthiest men, helped Mr. Obama buy his mock Georgian mansion in Chicago.” -- The Times of London February 26, 2008

The Auchi-Rezko-Obama connection came to public attention with federal marshals pounding on the door of Tony Rezko’s Wilmette Chicago mansion in the early morning of January 28, 2008. They hauled Rezko to jail after his bail was revoked for concealing a $3.5 million Auchi loan from the court. The Times outlines the story in two sentences. It should be of tremendous interest to the American public and the world.

But there is more to this story than run-of-the mill political corruption. Nadhmi Auchi is alleged to have a long affiliation with Iraqi Baathism and Saddam Hussein—which his attorneys deny. How close were they? According to a 1960 US Embassy report, Auchi was convicted along with Saddam by an Iraqi court for his part in a failed 1959 assassination attempt against then-Iraqi Prime Minister Qassim. For his crime, Auchi earned a sentence of “three years rigorous imprisonment.”

The US Embassy report is an interesting counterpoint to Auchi’s September, 2004 interview with the London Times in which he claims, “I left the Ba’ath party in 1962 and was jailed in Iraq when the party came to power in 1963….” What does “was jailed” mean? For those unaware of the 1960 US Embassy report, Auchi’s claim implies he was jailed by the Baathists when they came to power. But it might also mean he was still in jail from the 1960 sentence.

Posted by AnnaEsse at 18:14 No comments: