Jaycee Lee Dugard, Kidnapped 18 Years Ago, Turns Up Safe and Well: The McCanns Have Renewed Hope!! 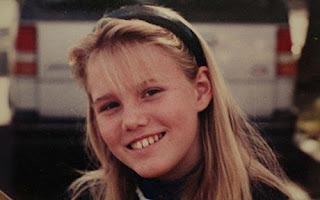 This is wonderful news for Jaycee's family, that she is safe and well after 18 years. She had been held captive and had been abused by her kidnapper, to whom she has borne two children, but she has survived and is being reunited with her family. Jaycee will no doubt have suffered emotionally and physically from her ordeal: living in a tent for 18 years, with rudimentary hygiene facilities, never seeing a doctor, no contact with the outside world according to early reports, will have taken its toll on her. God bless Jaycee, her two children who have never been to school and probably never had any health care and her family who had come to the point of just hoping that her body would be found.

Yesterday evening, I posted two comments on the Sky News article as the news broke. My first comment was just a brief remark about hoping the McCanns would not knuckle in on this story. My second comment laid a bet about how long it would take the McCanns via the pink-shirted one, to comment about, "renewed hope bla bla bla." Neither comment was published! And of course, we have a statement from the McCanns' spokesman!

"Clarence Mitchell, spokesman for Kate and Gerry McCann, said it gave hope that one day daughter Madeleine, snatched in Portugal in 2007, could be found safe and well.

He said: "They are extremely pleased. It strengthens their determination never to stop looking for Madeleine."

There are, of course, to anyone with half a brain still active after more than two years of the McCanns' media machine, at least a couple of absolutely huge differences between the Jaycee case and the Madeleine McCann case.

-Jaycee was on a public street when she was abducted.
-Madeleine McCann was tucked up in a bedroom in a holiday apartment, where there were two other children.

- In Jaycee's case, there was a witness, who saw the vehicle into which she was dragged and could give a description of the car. He also saw that there were two people occupying the car.
- In Madeleine's case, there was allegedly one witness, whose story changed quite considerably along the way, as well as her description of the alleged abductor: from a man carrying a bundle that could have been a child, the description developed into a man carrying a female child who was definitely wearing pyjamas identical to those Madeleine had been wearing.

Now, if the Amber Alert system had been in operation when Jaycee disappeared, it may have helped the police to find her before the kidnappers reached their destination, which was hundreds of miles from Jaycee's home.

There are strict criteria for the use of the Amber Alert system in the USA, and for the Abduction Alert system in Europe, as outlined by Rachida Dati, former French Justice Minister.

Now, although there was one witness in Jaycee's case, I suggest that the police would have to have acted on his information. He stated that he saw Jaycee being dragged into a car: criterion one met. Mr Probyn, Jaycee's step-father, saw and could describe the vehicle and possibly the two occupants: criterion two met. Three, four and five fall into line. There would have been a chance, in this case, I think, to intercept and apprehend the abductors.

In Madeleine's case. No evidence of an abduction, apart from Jane Tanner's statement and the McCanns' insistence that Madeleine had been abducted: no signs of a break-in at the apartment and no evidence left by an abductor: criterion one not met. Criterion two? "Accurate information to help locate the abductor."? The original description given by Jane Tanner, led to the "Eggman," sketch! An egg with hair! No vehicle description. So, what information might the police have issued to help locate an abductor? A person of vague description was seen carrying a bundle that could have been a child: (This was the initial description given by Jane Tanner.) criterion two not met. The other three fall into line, but would not have helped the police and would not be grounds for issuing an alert.

So, once again, the McCanns use another child's trauma, purely for their own ends of media attention. They are pleased? Pleased that their daughter may be in the hands of a paedophile being regularly sexually abused? If this did turn out to be the case, then the McCanns should be charged under the Children and Young Persons Act: serious harm resulting from neglect. In their own words, they left three children alone in an unlocked apartment, which was next to a public street, in a foreign country. This is not responsible parenting, however you dress it up with checks every half-hour or whatever.

Having had access to information, that the UK media has chosen to ignore for two years, mostly from blogs like that of Joana Morais, SOS Madeleine McCann, Enfants Kidnappés, The McCann Files etc., as well as Gonçalo Amaral's book about the investigation, there is little doubt in my mind that Madeleine is not going to turn up safe and well. She is not being held by some Fritzl-like paedophile. Sadly, I think that Maddie was dead before we ever knew her name and all we can hope for, those of us who have doggedly followed this tragic story, is that she will be found and laid to rest, with a stone that bears her name and the message that Madeleine McCann was here on this earth and will be remembered.

And finally, God bless that wonderful man, Gonçalo Amaral, who has been vilified by the UK press, and who has never given up his quest for the truth about what happened to Madeleine McCann on a cold night in May 2007.
Posted by AnnaEsse at 10:53 1 comment: