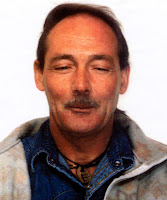 Well, it's the big news today! It's all over the newspapers and all over the net. Raymond Hewlett, a convicted British paedophile is the latest suspect in the Madeleine McCann case. Mr Hewlett, at the time Madeleine disappeared, was reportedly: an hour's drive from Praia da Luz; 70 miles away; 30 miles away; on a campsite near the Spanish border. It's a bit like 120 yards, 50 yards, 15 yards, in our own back garden!

"Clarence Mitchell, spokesman for Kate and Gerry McCann, said yesterday:" We are aware of Raymond Hewlett and the claims that have been made."

"The investigators searching for Madeleine are currently investigating the circumstances surrounding Mr Hewlett and these claims. Hewlett is an individual of interest to the investigation."

"The alarm was raised about Hewlett by a couple who met him while on holiday in Portugal, the Daily Mirror said.

When Alan and Cindy Thompson met the convict, he was living with his wife and six children in a converted Dodge truck travelling from campsite to campsite.

Mr Thompson told the Mirror: "Hewlett befriended us but kept quiet about his terrible past.

"We were mortified and disgusted to discover the truth."

"They also described a conversation in which Hewlett said he was approached by some "Gipsy tourists" offering to buy his daughter just before Madeleine went missing.

Mrs Thompson said: "We didn't think too much of this at the time."

This same couple were traveling in Pakistan in 1999, when they discovered the hideout of Osama Bin Laden. And they didn't think too much of that at the time, either, until they got back home.

"In the spring of 1999, A British couple called Alan and Cindy Thompson were driving through Pakistan, in the very area that they're now talking about as being bin Laden's location. After driving for 11 hours on dirt roads they came to a checkpoint and were detained by armed Pakistani guards.

The next day the Dawn newspaper, one of the biggest newspapers in Pakistan, reported that this couple had found the secret lair of Osama bin Laden.

More interesting is that they reported that this location had been visited by US consulate officers, British, Australian, and Swiss ambassadors, and that it was guarded by a team of US commandoes.

After the couple were picked up by the British embassy they were invited to a garden party where all the British ambassadors and aid workers were bragging that they were stationed in the same area as bin Laden's secret hideout.

After the couple got back home to England they saw a newspaper article calling for the capture of bin Laden. This was a few months before Clinton signed an executive order mandating bin Laden to be killed on sight.

The couple immediately contacted Scotland Yard in London; they contacted the FBI and the Pentagon and in every case got nothing. No response, no request for an interview. Nothing."

When the Portuguese police archived the Madeleine McCann case, the McCann family were given access to the case files. Those case files contain annexes, some of which have details of paedophiles who were residing in the Algarve at the time of Madeleine's disappearance, either permanently or on a temporary basis. Those details were not made public.

"Hewlett fits the profile of potential suspects: he is a paedophile and he was living in Portugal at the time.

Quite a few like him were traced and eliminated at the time, but there appears to be some confusion over what the Portuguese authorities did about him. They were aware of him at some stage."

"Hewlett was not on a list of known paedophiles in the Algarve compiled by British and Portuguese police at the time Madeleine vanished from an apartment in Praia da Luz.

His presence in Portugal came to light when a couple who befriended him became suspicious of his past. Alan and Cindy Thompson met Hewlett around December 2006.

He was living in a travellers' camp in Tavira, about 70 miles from Praia da Luz, with his wife Monica and their six children."

Posted by AnnaEsse at 14:07 No comments: