19 Madeleine McCann: L'Enquête Interdite - The Truth of The Lie - Chapter 19 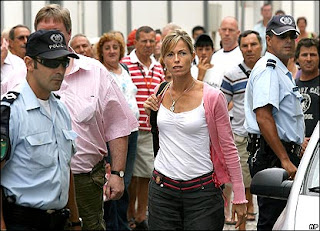 TOWARDS PLACING THE McCANN COUPLE UNDER INVESTIGATION.

In Portugal, the criminal process is comprised of three phases: the investigation, the instruction and the trial. Under the direction and control of the Public Minister, the investigation is led by the criminal police, who enjoy total practical and tactical independence. The police officers may make a declaration of arguido status as they think fit. This status confers on a suspect a set of rights and responsibilities. One of the fundamental principles of our code of criminal procedure is that of non-self-incrimination: it is illegal for information given by a witness to later be used against him and to implicate him in a crime. The right of silence, therefore, allows him to avoid giving incriminating details. But the status heaps opprobrium on those who become arguido, in spite of the principle of presumption of innocence.

With due regard to procedural regulations and faced with evidence of the concealment of a corpse and simulation of an abduction - partially confirmed by laboratory analyses -, we decide to question the McCanns before their imminent return to England. This decision is taken with full knowledge of the facts by the investigators, the Public Minister and the Director of the Judiciary Police. (PJ)

On September 3rd, the police officer Ricardo Paiva, responsible for relations with the couple, goes to their residence to inform them of the date and time of the interview. Kate reacts quite badly: she is worried about what her parents are going to think and about the reaction of the press. She even states that the Portuguese police, "is submitting to pressure on the part of its government to resolve the case as soon as possible." English and Portuguese investigators actively prepare the interviews and draw up a list of questions focusing particularly on the course of events on the night of the disappearance. The suspects must clarify for us the various contradictions raised in the course of their previous statements.

The decision to declare Kate and Gerald McCann arguidos was taken. Notification had already reached them. On September 6th, a little before 3pm, Kate arrives at the DIC in Portimão, accompanied by her press officer. Her lawyer has already arrived and the interview room is ready. The crowd has been building up outside for a while. Going through the door, Kate laughs as she says that this media scrum is good for tourism.

Her lawyer requests that she be heard as a witness and not interrogated as an arguida. We don't agree with what, to us, constitutes a backward step. Some officers involved in the investigation seem to be hoping for the miracle of a confession. We remain skeptical.

We finally decide to question her as a witness, but not to pose questions on the events after 5.30pm, the time at which she returned to the apartment with her three children. From that time on, everything she said could be held against her. According to the principle of non-incrimination, she would then have to be declared arguida since we have sufficient evidence to be able to do that.

On the subject of the press officer who was accompanying her everywhere, including to the police station, the opinion was unanimous: she had nothing to do with anything here.

- I have never heard of the role of the press officer in the penal code!...Perhaps it's the subject of the next amendment, or else it's a new method.

- Drop it. She is only going to sit near the police officers on duty and wait.

Her presence in the offices of the police during the interrogations seems unacceptable to me, useless and prejudicial to the investigation. However, she was to stay there from start to finish.

At 8 o'clock, we have a break to have something to eat, then the interrogation continues until 11pm. At the end of that day, we have learned nothing new with the exception of two details: Kate now remembers - five months after the event - that on the evening of May 3rd, Gerald was wearing jeans and trainers. Another detail came back to her: the time that David Payne had spent at her apartment. Gerald had spoken of 30 minutes, Kate now insists that he was only there for 30 seconds. We have never understood why it was so important to minimise this period of time. When Kate leaves the premises, we make sure that all necessary precautions have been taken to ensure her safety.

On September 7th at 11am, Kate Healy is declared an arguida on the basis of strong presumptions of the crime of concealing a body and simulating an abduction. She states her name and gives her address as her home in Great Britain. Taking advantage of the right accorded to her by her status, she remains silent and does not answer questions concerning the circumstances of her daughter's death, on May 3rd 2007, in the Ocean Club apartment.

At 4pm, it's Gerald's turn to be officially declared an arguido, for the same reasons. In contrast to his wife, he seems disposed to answer questions. He begins by vehemently denying any responsibility whatsoever in his daughter's disappearance. As far as the time that David Payne spent with Kate and her children is concerned, he now says that the 30 minutes represents the total time that it took David Payne, after having left Gerry on the court at 6.30pm, to drop in and see Kate, go to his apartment to get changed and get back dressed to play tennis. But the court was reserved from 6 to 7pm. Why did David go back at 7pm, ready to play, when he knew there wasn't time?

Questioned about the twins, who on the night of the tragedy, stayed deeply asleep in spite of the comings and goings, the shouts and the arrival of the police, Gerald admits having been astonished himself that they did not wake up in the middle of such a racket. To begin with, he even thought that the children had been drugged - by the abductor, you understand -, but he only spoke to the police about it later.

From the start, the way the children slept had seemed suspicious to us and we wanted to have screening tests carried out: nevertheless, faced with the media coverage of the case, we had put this off, worried about exposing the parents to trial by the public. This was a mistake.

It is only three months later that Kate speaks about this possibility, suggesting that the police proceed with these tests. The National Institute of Forensic Medicine let's us know that before proceeding with this screening, they would need to know what type of sedative they were looking for. There are hundreds of them on the market. While the grandfather stated on television that Kate gave Calpol to the children to get them to sleep, several months have gone by since May 3rd. Kate, who is a doctor, must be aware that the time for obtaining convincing results has largely passed.

It is known that the sudden withdrawal of sedatives can cause sleep problems. If Kate's journal is to be believed, the twins suffered from problems of that nature during the days following their sister's disappearance.

the book is getting more depressing by the chapter... it is so patently clear that the McCann's are responsible...

Can you tell me, Anna, how many more chapters are there to go?

Your task is nearly over - unfortunately, the task of bringing the McCann's to brook has still a long way to go

Three more chapters. In the Portuguese edition there are 23, but in the French, chapter 17, which is only one page, is part of chapter 16.

One (more!) thing that left me stunned, was Kate McCann turning up for her questioning with her press officer.

not only did she turn up with her press officer... but Justine McGuinness also engaged in illegal texting with Kate during her questioning...
I think this was mentioned in the Panorama doc & Justine passed it off as some kind of "horseplay"

That should have landed them both on some kind of charge of interfering with the course of justice. Kate McCann just never should any proper respect for the Portuguese police, but then I reckon she had such heavyweight support she didn't think she would have to.

Hi, thank you for all your efforts. Can I point out something? In chapter 19 it says on Sept 13th Mr Paiva went to tell the McCanns they were going to be questioned. Is this a typo or is it that date in the book.

I'll check that. Thank you. I have found some mistakes in the French version and checked them out with a Portuguese person. Thankfully, because of there being so much info collected on 3As, I usually spot the mistakes. Will let you know about this and thank you for drawing my attention to it.

Thank you for pointing out that date problem, i.e., when Mr Paiva went to talk to the McCanns. I have checked and changed it to September 3rd. It wasn't a mistake in the French version. It was my mistake! So, thank you for noticing and letting me know.