Madeleine McCann: The Truth of The Lie Chapter 20 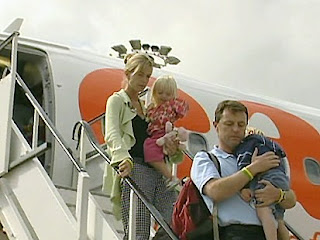 AN IRISH FAMILY IN A STATE OF SHOCK.

The McCann couple return to Great Britain after more than four months spent in the Algarve. It's an almost triumphant return. The media coverage is such that you'd think you were witnessing the liberation of hostages held for years in a far-off country. Gerald McCann is shown on television carrying his son, as he descends from the plane. The child's head is against Gerald's left shoulder and his arms dangling by his sides. Gerald walks across the tarmac, still holding his son closely against himself.

In Ireland, the Smiths are watching the BBC news, which is broadcasting the event. For them, it's a shock: that person, they recognise him. That way of carrying his child, that way of walking...It's the man they saw at around 10pm on May 3rd, with a little girl, who seemed to be deeply asleep, in his arms.

This image, brings back with a jolt, that of the man they encountered in the streets of Vila da Luz, on the evening of Madeleine's disappearance. It's as if the scene is repeating itself ....Mr Smith thinking he's hallucinating, sees the same report on other channels, ITV and Sky News. From that moment, he is sure: the man they came across that night was Gerald McCann. Of that there is very little doubt. Upset by the implications of this discovery, he alerts the police and waits to be called back by those in charge of the investigation.

When we receive this information, at the end of September, we think we finally have the piece that will allow us to complete the puzzle. Because of this, we may be able to reconstruct the course of events on that cold night of May 3rd in Vila da Luz. We have a better understanding of why Jane Tanner, "sent," the alleged abductor in the opposite direction to that taken by the man seen by the Smith family. Suspicion had to be diverted from Gerald who - if he was the guilty party - would have taken this route: leaving apartment 5A, the individual who was carrying the child, did not go east, towards Murat's house, but west in the direction of the beach.

We decide to get the Smiths back to the Algarve, for a formal identification of Gerry McCann - by means of televised images, certainly - direct confrontation being impossible - and possibly proceed to a reconstruction of the events of the night of May 3rd. The National Director of the Judiciary police agrees, the process is set in motion, all the details are sorted out; all that remains is to choose the hotel where they will be put up. But the Smiths were never to come back to Portugal. After my departure, the PJ were to change their minds. They asked the Irish police to proceed with interviewing the witness. That decision was to seriously delay the process since the Smiths were not interviewed until several months later. Meanwhile, rumours were to circulate and people not involved with the investigation would be made aware of the existence of this witness; someone allegedly even sought out contact with the family, without its being known to what end.

Thank you for reminding me of this.

reading Bren's latest blog, it seems less likely that 3A's will return any time soon.
Beo can't mod & run the website single-handedly and it seems his other commitments have left him flying below radar for the time being.


I would recommend members to join TheMaddieCaseFiles

Thank you for all your hard work with the translations. I'm understanding a lot more now :)

Me too, Sasha. We may have read lots of snippets about this book and read interviews, but reading Dr Amaral's own words has really brought home to me how difficult this investigation was for a bunch of dedicated police officers. They were working with suspects who could just take off and leave the country and refuse to go back and help with the investigation. Information they had a right to expect from another police force, like medical records and credit card information was withheld. Samples they sent to FSS in Birmingham were never analysed, or if they were, the Portuguese police never got the results. The McCanns were basically able to put two fingers up to the Portuguese police because of support at a high level. I really can't think of any words that might be adequate to describe that level of utter disregard for the authority of the Portuguese police and how much they put into the investigation.

Thank you for the translations of the book - What sort of 'power' is it that the McCanns seem to have over the Police, public, media etc.? I am outraged that they actually seem to have gotten away with murder........

I cannot understand how this is possible, these vile people are guilty half the British population know this how are they not locked up . I'm ashamed of my country .

Very interesting. Having watched crime watch uk a few months ago I decided to read this book. No wonder the McCanns never wanted it published cause they know it reveals the truth. How is it possible that they and their friends get away with leaving children as young as that on there own with apparently routine checks. Please! They would never get away with that here. They are covering her death so they don't come across as neglectful parents as something happened to her in that apartment whilst they were out having a good time. Public opinion is changing here in uk. Well done DR Amaral. Truth is out!

Thank you for the translation. Very intriguing, but worrying that the evidence does strongly point to them but nothing is being done. How irresponsible is it to leave small children alone in the first place!!

Thank you for this book, I knew my self they where involved in the little ones death and this just proves it. I believe every single word this man says and that couple are responsible for her death. The little girl has fallen behind the couch no dought drugged on calpol. She's hit her head and died on the floor. They have covered it up out of fear of losing everything including there other two children, what worries me is the apprent protection of the British forces, who are these people? What are they involved in? I suppose we will never know. But they should be charged with, neglect, manslaghter, and disposing of human remains. Everyone at that table should be done with neglect. Who in the right mind goes to dinner and leaves young kids asleep on there own, in a strange country? These people are animals. As for Payne he's got serious problems that needs investigated more.

Thank you, Fiona Weir. That looks like a good Scottish name to me. My grandmother, who brought up her family in the Gorbals was Annie Weir. Anyway, thank you for making some very good points. It seems to me that when Scotland Yard took on doing a review of the case, they should have started at the beginning and interviewed Kate and Gerry McCann and the friends who accompanied them on the holiday to count people out or count them in. I would say that was a good place to start but, in my opinion, they seem to have been looking for a patsy to pin the crime on. Just my opinion, but it does look like that.

Yes it's a Scottish name. Glasgow born and bread although I don't live there anymore I do miss it. Yes the more I read the book the more I realised they should have started with Gerry and Kate McCann. The explanation of the wee one falling behind the couch just kind of reaches out to me. But then there is why David Payne went to the apartment and why did Kate and Gerry get the time so wrong, one says 30 mins one says 30 seconds. Why the big gap? I shudder to think of other sinister involvement. I hope it's not that. For the sake of the kids that are already involved in that circle of friends.

I can just see Madeleine teetering on the back of the couch, cuddle cat tucked under her arm, doing what kids do. She's slipped and knocked herself out, had a nosebleed or haemorrhage, then asphyxiated. Sleeping medication on board wouldn't have done her any good and further compromised her breathing. This is just my opinion, but, I know kids all too well! Shame there wasn't an adult or a doctor! handy to render assistance.